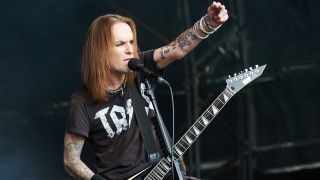 Children Of Bodom have issued a statement after Machine Head pulled the plug on their US tour.

They, along with Epica and Battlecross, had been due to support the American outfit on 21-dates in October. However, Machine Head decided to concentrate on completing upcoming album Bloodstone & Diamonds rather than hit the road.

And with tour plans now in tatters, Children Of Bodom frontman Alexi Laiho says he plans to use the time to sit down and write “angry shit.”

He says in a statement: “Our North American tour with Machine Head has officially been cancelled – this had nothing to do with me or COB.

“Shit fuckin’ happens, life goes on, and at least now we have an extra month and a half to write new COB shit. So instead of focusing on the negative, I’m gonna start to write music and it will be some angry shit.”

The frontman previously said he found it difficult making a living through selling records and that touring was the best way to earn cash.

He said: “It applies to all genres of music – it’s harder to make a living nowadays because people don’t buy records like they use to. But it’s nothing to complain about – you’ve just got to get out there and play live. Keep touring and you’ll be fine.”

Machine Head recently settled their legal row with former bassist Adam Duce – although details were never made public. He launched a legal action against the band at the start of the year, claiming he was owed at least $1.8 million.