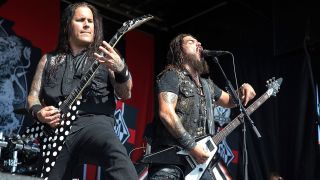 Machine Head have cancelled their upcoming US tour dates after running into difficulties with seventh album Bloodstone & Diamonds.

The band say they were forced to choose between calling the shows off – or lowering their standards in the studio.

As a result, they’ve asked fans to seek refunds form their ticket retailers, and promised to announce rescheduled dates as soon as they can. Their European tour will go ahead as planned.

Machine Head say in a statement: “Bloodstone & Diamonds has taken longer to complete than expected. We had to make the difficult choice to delay the album, let it go out as incomplete, or cancel the tour. We decided postponing the tour was the best decision.

“We fell this record is a milestone – we have something truly special here. But getting there has been a challenge.”

Mainman Robb Flynn last week told The Metal Hammer Show on TeamRock Radio: “I feel proud man – I just feel like we killed it on this thing.”

Bloodstone & Diamonds is set for release on November 10 via Nuclear Blast. Machine Head tour the UK with Devil You Know and Darkest Hour in December: