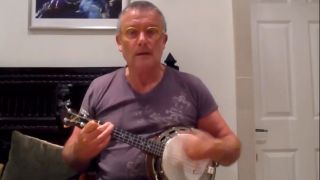 Carl Palmer has claimed he’s retiring from being a drummer – and taking up banjo playing instead.

In a video posted on his Facebook page, the prog icon announces: “Carl Palmer has thrilled listeners and audiences alike for nearly four decades with some of music’s most memorable bands.

“Along the way his dazzling speed and mastery of the drums, combined with his infectious stage personality, have secured for him a respected place in history as one of rock ’n’ roll’s greatest drummers.

“But he vows to continue his legacy with another instrument.”

The text is followed by 80 seconds of bespectacled Palmer’s banjo playing, after which he says: “Thank you!” and takes a small bow.

His former bandmate Keith Emerson earlier this year discussed retirement seriously, saying: “I’ve reached my 70th year – this might be the last year I perform in public.”