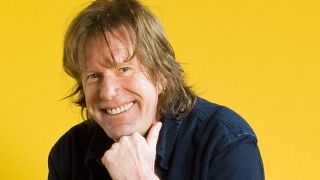 Keith Emerson has revealed he’s considering retirement as he turns 70.

Hopes for an ELP reunion are all-but gone after Greg Lake and Carl Palmer both dismissed the suggestion.

But the keyboardist’s comments might be the final word. Speaking ahead of a Moogfest appearance alongside synth pioneer Robert Moog, Emerson tells the Citizen-Times: “I’ve reached my 70th year. This might be the last year that I’ll actually perform in public.”

ELP last played together at Classic Rock’s High Voltage Festival in 2010. Drummer Palmer recently said of the show: “it wasn’t the greatest we’ve done but the crowd seemed to like it. I think it was good that we said goodbye.”

Bassist Lake last year said the chemistry between the three wasn’t there any more, reflecting: “It’s very strange, but there’s something about ELP that doesn’t work. It used to work, but it doesn’t now.”

Emerson’s most recent studio work was symphonic album Three Fates, released in 2012. He described it as his “most important since the ELP days.”