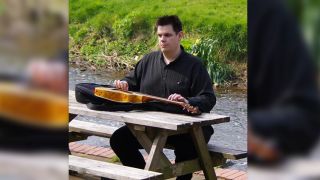 The multi-instrumentalist, who lost his sight to retinoblastoma when he was just 15 months old, will take over keyboard duties with Andy Latimer and co at the Progressive Rock Fes 2016, at the Hibiya Outdoor Theater, Tokyo, on May 22 – an event that also features Steve Hackett.

Jones says: “It gives me great pleasure, not to mention some disbelief, to announce that I will be playing keyboards for Camel.

“You could say I’ve got the complete opposite of the hump. I’ve known about this for some time but have only just been able to reveal it following a rehearsal and a lovely chat with the Camel chaps.

“Can’t wait to work with such a nice bunch of prog legends.”

Tiger Moth Tales came top in a Prog readers poll in the Tip For 2016 category following the release of 2015’s Cocoon.