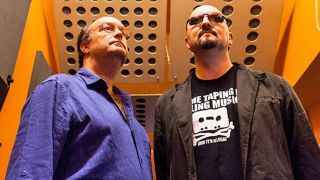 Burnt Belief have broken down each of the tracks on their second album – which they have also made available to stream.

They roped in three drummers to help with the record – Vinny Sabatino, Dean McCormick and Jose Duque.

And the duo have given an exclusive track-by-track breakdown of the record to Prog to go along with our exclusive stream of the 12 songs.

Read Jon Durant’s comments below, while listening to the stream available at the foot of this article.

Chromatique: The cloud guitar that begins the piece was done in the first round of stuff last August when I was alone in Portland. I did a ton of cloud guitar scapes that began the process. As it happens, Colin couldn’t figure out what to do with the weird descending chromatic melody, so he left it alone. A few months later, I was going back through things, and it resonated with me, and it very quickly kicked in for me. Put the piece together very quickly, Colin dug it, and built the end section. This was also the first track for Vinny, who totally nailed it.

Dissemble: The second of two pieces utilising a cloud scape that I thought was too ‘nice’. Colin ran them through his slicer to create rhythm patterns. The first rhythmic thing, a pulsing chord, is the cloud in question. In this case he then had this tabla figure, but the slice was in the wrong key for the tablas. So I suggested he pitch shift it to get it in line, from which he built the bass line. His first harmonic slide gave me the idea for the melody, and away we went.

Precis: This piece is a short summary of Burnt Belief. Colin had a couple ideas with the bass and programming, and no idea what to do with it. I re-arranged, moved, created chordal ideas and built the piece from there. He then re-did his bass parts and I constructed the final guitar, cloud and synth trumpet parts. Vinny came in and brought so much life to it. The moment when we come out of the bass harmonics and into the octave bass is one of the absolute highlights for me.

Hraunfossar: Named for a waterfall in Iceland, this is a piece that is very close to my heart. Based on a very long cloud guitar piece, Colin opted not to use the slicer, instead building rhythm tracks around the sections. I then built all the guitar parts and created the melody, based on what’s actually happening within the clouds. When I got back, I re-did all the guitar parts, including the rhythm guitar bits, which are the Klein played direct in, no amp. Dean McCormick added the lovely drum work that humanises Colin’s programming.

Convergence: One of the last pieces to emerge, this one began with a bass and drum machine idea from Colin. Once again, he had only the slightest sketch, and I moved, altered, and built the form and structure.

Rivulet: This piece evolved not long after the first wave of material. I composed the piece with an Eberhard Weber in mind, and Colin instantly caught the vibe and got right into the spirit. Needing more ECM styled drumming, my first thought was to have my friend José Duque play on it. The colours he added were the perfect complement to the piece.

White Keys: This one took some interesting twists along the way. Beginning with a cloud scape that was named for the fact that it utilised the notes of the white keys on the piano, I gave Colin a wide range of places to think harmonically. However, after sending me his ideas, I got another idea to take it in a different direction. I removed the clouds, and built an odd chord sequence and melody to float around his bass ostinata. Then, his funk section at the end had to be re-done because I’d added a key change to the mix. This one also has drumming from Colin’s friend Dean McCormick with whom we did a session in Luton, UK following our live show with Astarta/Edwin.

Not Indifferent: This one built from its fairly dark beginnings into a very explosive track with heavy riffs and screaming guitars. Colin loved the timbres of the cloud scape, and constructed the bulk of the piece around them. I then did some playing with his melody, and built numerous guitar parts around it. In the heavy section, one of the rhythmic/harmonic elements is a bizarre sound: it’s actually a piano, that’s running through an envelope filter and delays.

Hover: After the intensity of Not Indifferent, it’s a nice breather to have a piece that’s just guitar and upright bass. Very minimal. melodic, and spatial, Hover is another piece I’m particularly fond of.

Chimera: This was the first of the two pieces from the ‘too nice’ clouds used on Dissemble. In this case, Colin built a very challenging rhythmic illusion, with a strong 3 against 4 pulse. I added guitars that cycle 7 against 9 over his pulses. On top of that is the e-bow guitar, which is actually played rhythmically in spots, and the whole solo was played with an e-bow. Finally, the prepared piano was added as the clinching texture. Vinny solidified the whole piece, grounding it with his very unique patterns. The interplay with the guitar solo is another highlight.

Squall: A very dark storm to close the proceedings. The dark clouds that run through it were the launching pad for some of Colin’s most creative parts. The middle section, features a wonderful interplay between Colin’s uber cool bass line and Jon’s mellotron-led melody is another highlight moment for me. Once again, Steve Bingham came in and completely sealed the piece with his creative and cool violin. The way he added to my stick-esque rhythm part was perfect, and then doubling the guitar/mellotron melody was an unexpected joy.