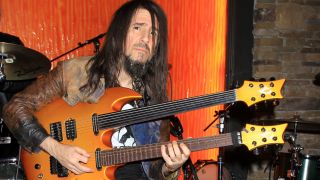 Ron ‘Bumblefoot’ Thal says he’s “repeatedly taking the bullet” as he maintains silence over his status in Guns N’ Roses.

In December Bumblefoot discussed “making choices” in regard to Axl Rose’s band, saying: “I’ve tried to do both and it’s been really difficult. There’s only so much time. You can only be in one place at a time and that kind of gets in the way of things.”

Now he says: “I’ve been honouring a request to not make any public statements, which continues to put me in a very awkward position that I don’t want to be in. Not how I do things, repeatedly taking the bullet on this one.”

And he explains: “I can’t erase a decade of history, and I can’t stop the media from asking what they want to ask and making up their own titles on interviews – no matter how much I ask them not to do it.”

Bumblefoot launches his tenth solo album, Little Brother Is Watching, next week. GNR guitarist Richard Fortus said earlier this week that Rose didn’t defend himself in the press because “he doesn’t think it matters.”