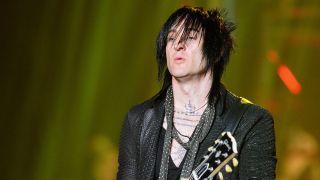 Guns N’ Roses guitarist Richard Fortus says Axl Rose is motivated purely by the music and that a future reunion of the classic GNR lineup is unlikely.

Fortus – who has been with GNR for 13 years – insists any criticism that Rose is only in it for the money is absurd, because if it were all about cash he’d have pushed for a reunion.

The guitarist tells Mitch Lafon (via Blabbermouth): “I’ve never met anybody that has so much genuine musical integrity. He won’t whore himself out, he won’t do anything for business or money. It’s just about the music.

“And he won’t defend himself in the press, because he doesn’t think it matters. It’s just about the music — that’s all he cares about. I’ve worked with a lot of people in this business, and I’ve never seen, or met, anybody that was motivated purely by that desire to make art.

“And you can say whatever you want about it, because he’s not gonna defend himself, but he is that, and that’s for sure. Otherwise, there would have been a reunion, because the offers for money have been outrageous. But he would never do a reunion unless it was for something besides money.”

Rose has come under fire for repeatedly taking to the stage hours after the scheduled start time. Fortus at first thought it was for effect, but he says he realises now it is more about Rose getting himself in the right frame of mind.

He adds: “For the longest time, when I first started with the band even, I thought it was by design. I thought, ‘He has this worked out.’ Because it’s two hours after we’re supposed to start, three hours, and the stadiums are full of people just booing.

“And the second he’d walk out on stage, all that energy on the verge of chaos, of just imploding and everyone just rioting, right at that moment he walks out on stage, and all of that negative energy just goes totally up right into the palm of his hand.

“I mean, it’s phenomenal to watch. And I thought it was by design. I thought that he had figured out some type of way to judge the moment, but it’s not. That’s just what he is. He’s not gonna walk out on stage until he is ready.

“It’s not like he’s sitting back watching TV and eating potato chips. Man, he goes through a lot to walk out on stage. Just to get into the right place within himself.”

Fortus adds that GNR are working on new material whenever they have the time, although there are no upcoming tour plans or any confirmed dates for when a new record will be released. He said last April that new music would be out within 12 months.