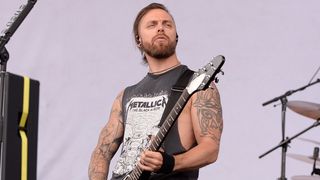 Bullet For My Valentine say fans are in for a surprise when they listen to their upcoming sixth album.

The band are putting the pieces in place for the follow-up to 2015’s Venom, with vocalist and guitarist Matt Tuck reporting that what they have in place is already sounding “incredible.”

Tuck tells NME: “We tried to make it a different sounding record, we’ve tried to approach songwriting differently. I think initially it’s going to take a lot of people by surprise by the way it sounds and the instrumentation we’ve incorporated into it this time.

“But I think as soon as the dust settles and people get to live with it… it’s a corker. It rocks. We’re still in the demo phase, but even at this stage it sounds incredible. It sonically sounds better than anything we’ve ever done.”

Tuck adds: “We don’t want to regurgitate anything we’ve done in the past. That’s the past – we want to look forward to the future.

“We tried to make things bigger by calming things down on the technical side. We’ve still got really big, massive, heavy groove songs, but instead of being super-thrashy and technical on the guitar, they are far simpler and far more digestible, but it gives you a far bigger sound.”

Earlier this month,Bullet For My Valentine confirmed that touring drummer Jason Bowld was now a full-time member of the band.

They’ll tour across North America throughout January and February next year with Avenged Sevenfold and Breaking Benjamin.

Find a full list of their upcoming shows below.

Bullet For My Valentine 2018 tour dates

Bullet For My Valentine premiere live Don’t Need You video