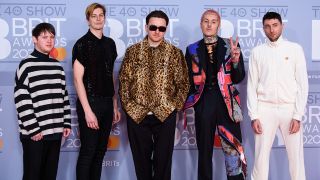 Bring Me The Horizon were guests at last night’s BRIT awards ceremony at The O2 in London.

The band were shortlisted in the Best Group category – and although Foals took home the trophy, the Sheffield heroes set tongues wagging because of what they were wearing.

Oli Sykes and co. decided to pay tribute to the Spice Girls by matching their fashion choices with what Scary, Sporty, Baby, Ginger and Posh were wearing at the BRIT awards back in 1997 when they clinched victory in the Best Video and Best Single categories.

In a nod to the lack of women on the shortlist, Bring Me The Horizon tweeted a picture of themselves and Spice Girls with the caption: “Girl power.”

The song also appeared on the official soundtrack Death Stranding - Timefall: Original Music From The World Of Death Stranding which also feartured artists including Chvrches, The Neighbourhood, Flora Cash and Major Lazer & Khalid.

Bring Me The Horizon have several live shows planned over the coming months, kicking off with an appearance at the Sonic Temple Festival in Columbus, Ohio, on May 15.

Death Stranding
Hideo Kojima’s new video game see the player take control of Sam Bridges as he traverses a ravaged landscape crawling with otherworldly threats in order to connect and save mankind.View Deal