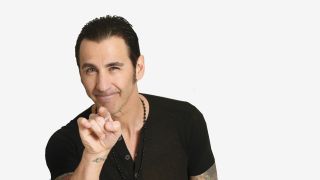 Godsmack's Sully Erna wasn't really prepared for the moment he figured out his band had made it.

"When you've been in it for song long, and you've been through so many bands, and you've lived this life – band disappointment, band breakup, record label rejection – after a while you just become immune to it all," he says. "And when it started to happen for us, we didn't even see it coming. We were just trying to keep up with it.

"It didn't hit me until the day we came through Boston for some awards. Our record company took us out for dinner afterwards, and presented each of us with a gold album. And I thought, 'Oh My God. We've sold 500,000 albums.' That was a huge, pivotal point for me."

20 million album sales later, Sully Erna is clearly used to this sort of thing. Relaxed in his record company's office in West London, he's he's telling Classic Rock about the records that got him here.

When Legends Rise is out now.

"The first record that changed my life in a huge way was Aerosmith's Rocks. I'd been a musician since I was three-and-a-half years old, and I was raised on blues and more jazzy music: Buddy Rich, Ray Charles, Etta James and a lot of old-school stuff. But then I discovered Joe Perry and Aerosmith. A friend played me Last Child from Rocks. I think it was the first time I smoked a joint, and it was a really life-changing point for me, because it really lured me into the world of rock. It was super-cool for a young kid."

"This was a huge record for me. They were loud, they were awesome, they were tight and they were basic... but they had really catchy songs. It was just a powerful record. Even the artwork was simple. There was nothing to it. It was just pure rock music."

"The first song I ever heard from Metallica was on vinyl. A friend of mine brought Kill 'Em All and Ride The Lightning over at the same time, and I remember being hit instantly by The Four Horseman and Hit The Lights. I had never heard a band like that before. It was just incredibly fast and loud... and shocking! I remember not even being sure if I liked it at first, but after a few listens you were in a whole other stage."

Judas Priest - Unleashed In The East

"The first time I heard Judas Priest was the live version of Victim Of Changes, and it blew my mind. It was so insane. My friend, who was playing the record, cranked up the sound on this awesome, huge stereo that his parents had in their basement, and I remember just sitting there paralysed. The power of the song – and the groove, and the riff, and the voice, and the notes he was hitting – absolutely blew my mind. That was a huge moment for me in music."

"This was a big record in my life. Being a drummer my whole life, I found that they were a little more technical than Judas Priest and AC/DC, and it was getting more fun for me to play."

"This was life-changing for me. I quit school, I quit my family, I quit my friends, I quit everything at that point. Because all I wanted to do at that point was go home and study Neil Peart. He was the Mecca of drummers for me. I'll never forget when I heard Tom Sawyer for the first time. I remember what town I was in, I remember who I was with, and hearing the song on the radio. When that big chord hit at the end, and the drum fill played out, I was like, 'what the fuck am I hearing right now?' And the only time I went back to school after that was the steal the wood blocks from the music room, because I was trying to build this enormous drum kit to replicate everything he did on the album. Discovering Neil Peart was the biggest life-changing moment of all."

Pink Floyd - The Dark Side Of The Moon

"As I was transitioning from drummer into singer and starting this band, Alice In Chains really stood out from the Stone Temple Pilots and Soundgardens. There was something a little more mystical about them, and Layne Staley's voice was so good. It responded to tape so well. There's some singers out there who are really great, and you record them and it's just OK. And there's other singers whose character takes to tape really well. Amy Winehouse had that: just a really strong presence on her recordings. With Layne Staley it was the same. They were really cool: great songwriters with a really cool vibe."

Dead Can Dance - Into The Labyrinth

"In about 1993 I discovered Dead Can Dance. They changed my life dramatically in the sense that it was the first time I'd discovered this kind of earthy, organic, mystical, hypnotic, eclectic kind of music. The vocals of Lisa Gerrard changed my life. It's the reason why songs today like Voodoo and Serenity and The Spiral and some of my solo stuff from Avalon sound the way they sound. They were a tremendous inspiration to me musically. It was a whole different world that I discovered through Dead Can Dance."

"That record changed all our lives. It was the first time we'd finally written a batch of songs that took us from being a garage band, scraping by on the streets of Boston, still living in that fantasy world and dreaming about becoming a successful musician or rock star, to actually becoming one."

Godsmack's When Legends Rise is out now.