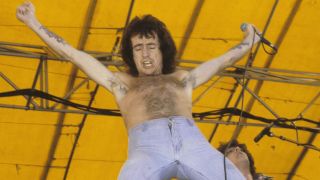 A book on late AC/DC frontman Bon Scott written by three of his close friends will be released next month.

The publishers describe the book as a “deeply personal and revealing portrait” of Scott and add: “We learn what it was like to be his friend, live and tour with him, and be part of the close-knit world from which one of biggest bands of all time emerged.”

They continue: “With Bon there was always sex, drugs and rock’n’roll, but Live Wire also demonstrates the humour, intelligence and warmth of the man. From his early days with The Valentines, living in rundown apartments in inner Melbourne, to the legendary early years of AC/DC, this is the story of Bon, told by three of the people who knew him best.”

John D’Arcy was a roadie for The Valentines and AC/DC, while Gabby was a fan of the band and was one of Scott’s closest friends. Fashion designer Renshaw met Scott at a Valentines gig in 1967.

Earlier this month, AC/DC fans raised enough money to erect a statue of Scott in his birthplace of Kirriemuir, Scotland. Scott died in 1980 and was later replaced in the band by Brian Johnson.

Bon Scott - The Man Behind The Myth