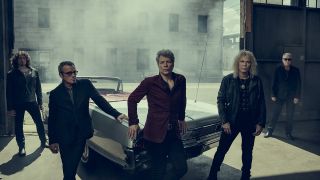 Bon Jovi will return to the UK next month for three huge shows on the This House Is Not For Sale tour.

The band will play at Liverpool’s Anfield on June 19, London’s Wembley Stadium on June 21 and Coventry’s Ricoh Arena on June 23.

And they’re giving fans the chance to appear on the big screen at the three venues through a new social media campaign.

The band are asking fans to share photos or video of their favourite Bon Jovi memories, using the hashtag #BonJoviMemories. Fans are also asked to tag the city of their choice to be in with a greater chance of seeing themselves on the big screen.

Bon Jovi have also shared a video showing them rehearing for the tour, which will also see them play dates in Russia and Europe throughout the summer.

Earlier this week, frontman Jon Bon Jovi was awarded an honorary Doctor Of Music degree by the University of Pennsylvania.