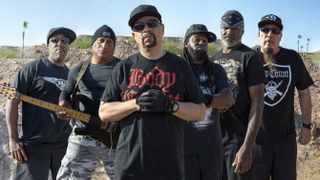 It will launch tomorrow (March 31) with guitarist Juan Of The Dead checking in to report on the sound of the follow-up to 2014’s Manslaughter.

He says: “We locked ourselves down in Arizona and compiled riffs and ideas – all of us in the same room which was cool. Producer Will Putney jumping onboard helped out tremendously.

“The guitars on the new record are a continuation of Manslaughter, but at the same time it’s gone back to the roots. I feel there’s a little more thrash involved – it’s more thrashier but technical.”

The new video also shows Ice-T and co working in the studio on the track No Lives Matter. They released a promo for the song last month and recently launched a hard-hitting video for Black Hoodie.

Ice-T previously said: “Music happens in climates. Groups like Rage Against The Machine and Korn were born when the world was in turmoil, then music went into this delusional period where hip-hop became about nothing more than poppin’ bottles.

“Now we have impending doom again, racism is at an all-time high and it’s our season again. This is the optimal time for a Body Count record.”

Bloodlust is now available for pre-order.

Ice-T: Bloodlust title comes from my overview of humans