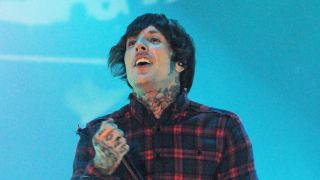 Bring Me The Horizon have confirmed their live DVD, shot at their Wembley Arena show in December, will be released this month.

It was originally set for launch in March but the production phase was extended. The band streamed their performance of Drown in February.

Now the release date of BMTH: Live At Wembley Arena has been confirmed as May 29. It’s available for pre-order as a DVD/2CD set, and all those placing their order before May 21 will have their name printed in the accompanying booklet.

The Sheffield outfit play the Reading and Leeds festivals in August.