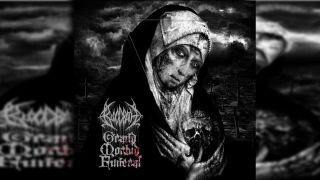 Grand Morbid Funeral is the band’s first album since the departure of Opeth frontman Mikael Akerfeldt – and Metal Hammer will exclusively reveal the group’s new singer on September 16.

The album will be released on November 17 via Peaceville Records.

It’s their fourth full-length studio album and comes on the back of 2008’s The Fathomless Mastery and guitarist Anders ‘Blakkheim’ Nystrom says fans can expect “destructive, raw, heavy, organic and sludgy death metal.”

He says: “We’re proud of all these different styled releases and we loved doing each and every one of them, but the objective was never to settle with a certain style, so our time has come to shift once more.

“It was already decided right after the last album that the next record would not become The Fathomless Mastery part two, but in certain aspects it would actually become its antithesis.

“So prepare for an ultimate blueprint of destructive, raw, heavy, organic, and sludgy death metal.”

The band are due to appear at several festivals in 2015, including Inferno in Norway and the Maryland Deathfest in the US.

The album’s tracklist will be issued closer to launch.