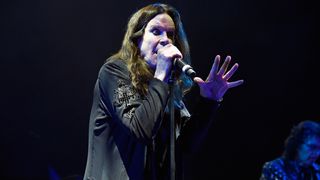 Ozzy Osbourne says that the track Black Sabbath is “the scariest song ever written.”

It led off their self-titled 1970 debut album – and Ozzy says without that song, he wouldn’t have been given his famous nickname.

He tells NME: “When we started gigging way back when, as soon as we started playing this song’s opening chords, young girls in the audience would fucking freak out. They thought we were Satan’s fucking friends or something.

“That’s when the whole Prince Of Darkness shit started. When people get excited about Halloween coming around each year, all I think is, ‘Well, we used to have Halloween every fucking night.’”

Black Sabbath are gearing up for the next leg of their The End tour, which gets underway in November.

Ozzy previously said that when Sabbath’s career comes to a close with a pair of shows in their home town of Birmingham in February, he has no plans to retire and will record his first solo album since 2010’s Scream.

And it’s a point he reiterates, adding: “It’s not me that wants to retire – it’s Black Sabbath. I’ll be continuing my own musical thing.

“My wife is good at telling me partial information, but I know I’m not hanging my boots up for a while.”

In August, Ozzy said he hadn’t completely given up on the chance of estranged drummer Bill Ward returning to the band for their final shows – despite Ward ruling himself out after their public war of words.

The vocalist said: “I’m sad that Bill never came through. Every time I reach out to Bill I get yelled at for something. If something can be worked out, great.”

The End tour continues in Oklahoma on November 8.