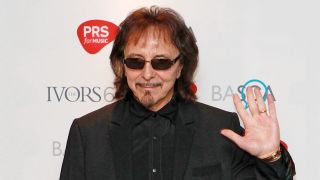 Black Sabbath icon Tony Iommi says drummer Bill Ward could still return for their farewell tour next year – but he’s not currently included in their plans.

He’s not sure if the band will make a follow-up to 19th album 13 before they split up.

And he says the “big production” road trip, which could last a year, will only feature material from their Ozzy Osbourne years.

Sabbath last week confirmed the first dates of a tour entitled The End.

Iommi – who’s been living with cancer since 2012 – tells the Birmingham Mail: “I can’t actually do this any more. My body won’t take it much more.”

As he gears up for another health check-up he adds: “I don’t want that creeping back again, and all the travelling involved in Sabbath tours increasingly takes its toll.

“We’re going out on one last tour, to say our farewells – then it very definitely is the end. We won’t be doing it again.”

Ward and the band fell out ahead of the making of 13 after he said he hadn’t been offered a “signable” contract. Osbourne later suggested the original drummer wasn’t fit enough to perform, leading to a new ward of words between the pair.

Asked about the chances of his return, Iommi replies: “That depends on Bill. We met up again six weeks ago and we got on great, but it’s down to Bill. Our plans as they stand are to tour with Ozzy, Geezer Butler, myself and Ozzy’s drummer Tommy Clufetos, who did so well on the last tour.”

He says of their album plans: “I’ve been busy writing songs ever since the 13 sessions – at that point we thought there might be another Sabbath album. But that’s up in the air now, so I don’t know when or where they might appear.”

While no UK tour dates have yet been confirmed, Iommi says it’s just a matter of time. “The logistics are still being worked out. Even we don’t know all the dates yet.”

He adds: “It’ll be a big production. We’ll be putting together a setlist that traces the band’s career from our early days in Birmingham.

“All the fan favourites will be in there, and we’re looking to include some songs we’ve rarely performed live, too. All the material will be from albums on which Ozzy is the singer. There won’t be any Ronnie James Dio material in there.”

Iommi reflects: “We’ve been doing this for getting on for 50 years now. It’s about time we draw the line, don’t you think? It’s been great – but it’s time to stop now.”