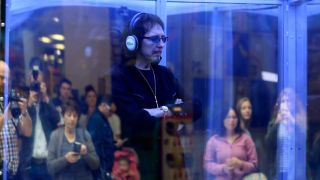 Tony Iommi thought he’d “had it” when he was diagnosed with cancer in 2012, he’s said.

The Black Sabbath guitarist reflected on his experience with the disease at a Macmillan Cancer Support event in his home city of Birmingham yesterday.

He invited passers-by to stand in an isolation box, to demonstrate how people can feel alone in a crowd when told they have cancer.

“Some people get frightened and locked in this box, and they can’t do anything. It really is a lonely time – to talk to somebody is probably the best therapy you can have.”

Iommi, 67, added that working on Sabbath album 13 also helped. “I had my friends round me, my family round me, getting my mind off it. It was really great, actually. It brought us together so much.”

The band are thought to be gearing up to record their final album, which is expected next year. Macmillan’s Not Alone campaign continues.