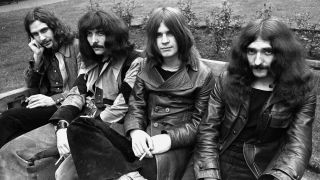 An early performance of Black Sabbath classic Iron Man, featuring different lyrics from the studio version, is available for streaming.

It was recorded in Montreux in August 1970, before the band released it on second album Paranoid in September – but after they’d recorded it in June.

In the live version frontman Ozzy Osbourne sings: “Now he’s standing there, Iron Man don’t you dare, For he wants you, too, Iron Man, I love you.”

The recording appears on the recently released four-disc Paranoid: Super Deluxe Edition, which contains the 2012 remaster of the original album along with a 1974 quad mix (folded down to stereo) and live shows in Montreux and Brussels in 1970.

In the liner notes, bassist Geezer Butler says of Iron Man: “I just thought it was the heaviest thing I’d ever heard, so I wanted to reflect that in the lyrics. Ozzy had said the riff sounded like some big iron bloke walking through the city, so I thought, ‘Oh, that sounds good.

“‘I’ll make it about some guy that gets turned into steel, and goes into the future in a time machine, then comes back and wants to warn the world that they’re on the wrong way of doing things – and people just don’t take any notice of him.’

“It sort of reflected what people thought about the band, the way we were slagged off in the press. Eventually the iron man in the song gets his revenge on them.”

Black Sabbath are reaching the end of their farewell world tour. They complete a South American run next month then play eight UK shows, winding up with two nights in their home city of Birmingham on February 2 and 4. Butler recently admitted: “My life will be very empty without the band.”

Why Black Sabbath's Paranoid is the Quintessential Heavy Metal Album

Black Sabbath Quiz: How well do you know Paranoid?