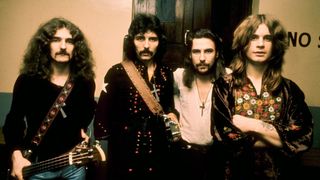 It’s fitting that Black Sabbath’s second album, Paranoid, topped the UK album charts in the first year of a new decade. In capturing the zeitgeist, the eight tracks created by the Birmingham four-piece put a definitive musical full stop to 1960s hippy ideals propagated by Haight-Ashbury, free love and flower power. The long shadow of the seemingly endless Vietnam War had sapped the naïve optimism young people had felt during much of the previous decade. The mood was changing, getting darker. And who better to provide a musical representation of this altogether doomier worldview than four working class, socially deprived young men from the bleak and industrial city of Birmingham? As vocalist Ozzy Osbourne put it in his typically laconic manner, “Be sure to wear a flower in your hair. What’s all this flower shit? I’ve got no shoes on my feet.”

Paranoid was produced by Rodger Bain and recorded in London at two studios, Regent Sound and Island. Many have claimed that it’s the most powerful example of heavy metal music in its purest form. US outfits like Iron Butterfly and Blue Cheer released loud, raw, guitar-heavy albums before Paranoid came out, and Sabbath’s English contemporaries Led Zeppelin had put out their hugely significant début album a full 20 months earlier. But it’s Paranoid’s relentless stripping of the traditional blues guitar phrasings favoured by earlier rock bands, together with Sabbath’s seemingly tyrannical expunging of sex from the lyrical palate, that makes the album a game changer and a defining moment in heavy metal.

This is an album that’s unashamedly built on a bedrock of riffs, riffs and more riffs. Bill Ward’s drumming is appropriately brutal, but there’s an absolute singularity of purpose in the way the songs subordinate themselves to guitarist Tony Iommi’s playing that makes numbers like Iron Man and Electric Funeral come across as utterly relentless and unstoppable. But riffs aren’t the only weapons in the Sabbath armoury on this album. Bassist Geezer Butler’s lyrics are perhaps surprisingly intelligent – if thoroughly pessimistic – for a group that wasn’t afraid of bludgeon. War Pigs is an articulate exposé of warmongers, despite the lazy rhyming of “Generals gathered in their masses/Just like witches at black masses.” Hand of Doom, meanwhile, offers an unflinching look at hard drug use amongst former soldiers as a means of coping with what was later recognised as Post Traumatic Stress Syndrome.

And then there’s Ozzy. It’s perhaps only now, a staggering 46 years after he delivered these performances, that we can see just how different a vocalist he was. Not for him the preening usually associated with band frontmen. Ozzy never sounds like he’s there to fluff up his own ego like, say, early Robert Plant. No, his defiantly sexless vocals are just another tool, willingly and effectively subjugated to this collective musical juggernaut.

Given the band’s addiction to musical brutality the album’s one moment of introspection, a jazz-inflected, almost whimsical piece titled Planet Caravan, should feel mis-placed and plain wrong. Yet somehow it works, perhaps as an extreme counterpoint to Paranoid’s overall dedication to power.

It’s no coincidence, meanwhile, that the track from which the album takes its name remains Sabbath’s musical calling card. Its unvarnished lyrics (“Happiness I cannot feel and love to me is so unreal.”), jagged riff structure and avoidance of unnecessary frills have proved to be the bedrock of this unique band’s quintessential heavy metal sound for the best part of half a century.