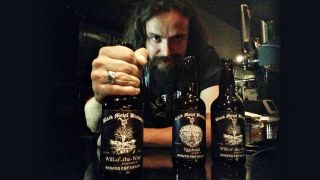 The owner of a brewery that seeks to blend beer with heavy music says his first three products are like the release of a band’s EP – and a full album of drinks will follow.

Black Metal Brewery drinks are receiving positive reviews from real ale fans, and the stout has already won a newspaper award. They’re on sale across Scotland and the north of England, with distribution in the south about to be confirmed.

Ratsep tells TeamRock: “I like to compare the beers to our first EP – we have a liquid sound check. We hope to expand the range later to become a full album release.

“Demand for our beers, staying on the band theme, is like people asking for specific songs at a gig.”

The firm started 18 months ago on a farm outside Edinburgh before launching officially from premises nearer the city.

Ratsep – who plays guitar in a band – sees a strong connection between beer and metal. He says: “Both have got to be bold, true in taste and spirit, and uncompromised in quality and strength.

“Through the history of mankind, music and drink went hand-in hand. Metal music and beer are inseparable. And so-called ‘extreme’ metal calls for appropriate brews.”

While he says some beers are contract-made for a band to add its label, his are different. “Black Metal Brewery was born listening to metal, and with the character and passion for both music and fermentation. BMB produces real craft ale, brewed by metal folk for metal folk – and lovers of good beer in general.”

Talks are underway for the drinks to be sold at festivals this summer, including Bloodstock. Rasep says of his products: “Yggdrasil is named after the World Tree of Nordic cosmology. Will-o’-the-Wisp is full-bodied with a slightly smoky flavour that lures you into the void. Blood Revenge quenches one’s mighty lust for mercilessness.

“I’d never sell a beer I didn’t like myself. Behold thy drink and hail the ale!”