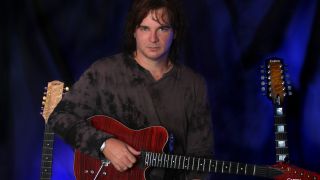 Asia will tour as support to Foreigner on the AOR giants 40th Anniversary UK tour in November. Billy Sherwood will replace the late John Wetton as bassist and singer, as he is doing on the forthcoming Journey live dates in the USA later this month. Steve Howe is back in the band, replacing his own 2013 replacement Sam Coulson, whilst drummer Dylan Howe, son of Steve, replaces Carl Palmer on drums.

A press release out out this morning by Foreigner’s PR announced the news, naming Sherwood as “John Wetton’s chosen successor”, in a move that echoes Sherwood replacing the late Chris Squire in Yes. Seeing as both Yes and Asia share management, this doesn’t come as a huge surprise.

Although there’s been no word on Asia’s own website, a statement has appeared in the last hour on the band’s Facebook page intimating that these dates constitute a planned tribute to Wetton. The full statement reads: “A tribute to John Wetton is being planned, end November, 4 dates including the Royal Albert Hall, with members of Asia as special guests of Foreigner. John Parr will be opening the show. Signed up so far are Geoff Downes and Steve Howe, with Carl Palmer unable to join due to prior commitments. Dylan Howe will be on drums and Billy Sherwood will be on bass and vocals. Note that this is an official tribute fully endorsed by John’s estate, John’s family, Lisa, Dylan, Geoff, Carl, Sam, Steve, Billy, management and all the Asia and official JW team.”

Tickets go on general sale this Friday at 9am.