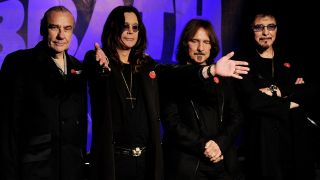 Bill Ward has recorded a short video message saying he’s “open-minded” about playing with his former Black Sabbath bandmates again at some point in the future.

The drummer bowed out of the Sabbath’s reunion in 2011 – just months after it was announced, reporting he hadn’t been offered a contract he regarded as “signable.”

This led to a war of words, between him and frontman Ozzy Osbourne, who at one point suggested Ward wasn’t healthy enough to play his role.

However, in May this year, Ozzy said he’d like to do “one last gig” with Ward, after the drummer missed out on Black Sabbath’s final shows in their home town of Birmingham in 2017.

Those comments were recently followed by bassist Geezer Butler, who told Classic Rock: “If it came up I wouldn’t say never. I can’t imagine it ever happening, but then I said that about the Sabbath tour, and it happened, so who am I to know?”

In the recent Twitter video message, Ward says: “Hi everybody. My name is Bill Ward, and I wanted to say that I love Tony, Geezer and Ozzy very much.

“I’ve loved them for a long time, and I still do and I would be very open-minded to any ideas about playing together in the future. That's it. Love you all. Thanks.”

Both Ozzy and Tony Iommi have expressed an interest in Black Sabbath possibly reuniting in 2022 to mark the Commonwealth Games in Birmingham, but nothing has been said about the idea since last summer.