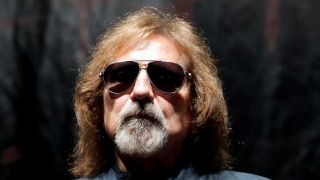 Speaking in the brand new issue of Classic Rock, the bassist said: “If it came up I wouldn’t say never. I can’t imagine it ever happening, but then I said that about the Sabbath tour, and it happened, so who am I to know?”

The metal legends officially retired in 2017 following their The End tour. While Butler says that he is still in touch with former bandmate Tony Iommi, he says he has not spoken to Ozzy Osbourne.

“I haven’t seen Ozzy at all,” he says. “I’ve seen Tony and Bill [Ward, original drummer] at a couple of awards things we’ve done, and me and Tony stay in touch through emails, but that’s about it. But it’s good between us. It’s like having brothers. You don’t have to be in touch.”

Butler is currently a member of Deadland Ritual alongside former Guns N’ Roses drummer Matt Sorum, Billy Idol guitarist Steve Stevens and singer Franky Perez. He admits that he had no plans to join another band after Sabbath ended.

“I thought I’d been in my last band,” he tells Classic Rock. “I even swore to myself that was it, never again. I didn’t even pick up a bass  for a year. I did believe in retirement – until I actually did it.

“I got addicted to watching TV every day and became a couch potato. So when Matt Sorum called to ask if I’d be interested in joining
a band, I said yeah. Life is better when I’ve got a band on the go, definitely. I’ve been in a band for the past fifty years. It’s just what I’m used to. I thought I could do without it, but I can’t. So I’m glad to come out of retirement. I’m trying to get it all off now, get all my fat off.”

Deadland Ritual released their first track,  Down In Flames, last year and followed it up with Broken & Bruised earlier this month. The band are currently writing songs for their debut album.

“The material is less bluesy than Down In Flames and not really what you’d class as heavy metal. It’s not like a modern heavy band, like thrash and all that stuff. I think it’s more like the old Sabbath kind of hard rock.

“I’ve just written one set of lyrics so far, for a song called City Of Night. That’s about coming to the end of your life and wondering what it was all about. There’s a song called Broken & Bruised. Franky has written a couple of lyrics about mental health, and one of those is called Walking Into Walls. It’s terrible over here in LA, because there’s a horrendous number of homeless people that are homeless because of mental health.

Butler says that even after more than 50 years in the music business, the new band feels like starting from scratch.

“We’ve really got to prove ourselves again, which is something I’ve been missing for a long time,” he says. “We’re just another band. If we were a ‘supergroup’, we wouldn’t be playing small clubs and we wouldn’t be fifth on the bill at festivals. If you look at yourselves as superstars, you may as well pack it in. We’ve got seven new songs in the set, and we’re coming to people that have never heard them before, so that’s a bit more of a challenge, So it’ll be interesting to hear what the reaction is.”

The new issue of Classic Rock is on sale now. To celebrate the arrival of the Great British Summer, the we asked musicians and readers to ‘edit’ the mag and decide which features we should run this month.

The new issue also comes with and a 132-page eBook featuring the legends of the 70s, plus a CD featuring the best tracks of the year so far.

If you buy the magazine from UK newsstands or direct from us online, there's more: a 100-page Pink Floyd book, a giant pair of double-sided posters featuring The Rolling Stones and Elton John, and a 132-page eBook featuring the legends of the 70s.

And there's more! Readers who pick up the new Classic Rock from the larger branches of Tesco or Sainsbury's will also receive a free 148-page Kiss Bookazine (right) that normally retails for £9.99!