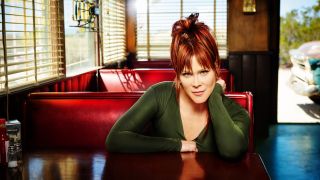 Beth Hart is streaming her new song Love Is A Lie exclusively with TeamRock.

It’s taken from Hart’s upcoming eighth album Fire On The Floor, due for release on October 14 via Provogue. She previously issued a video for the title track.

Hart says recording the album gave her an emotional release following the bitter-sweet sessions for previous effort Better Than Home.

“We were still in the mixing stages for that album and I knew I had to make another record,” she says. “Making Better Than Home was so painful, because one of the producers, Michael Stevens, was dying of cancer. It was a very emotional record to write and to make.

“I wanted the songs for Fire On The Floor to get born real quick.”

Fire On The Floor is described as a genre-crossing collection of 12 tracks that reflect Hart’s teenage influences, which took in everything from gospel, soul and classical to Soundgarden.

She says: “As a writer, I feel really stifled if I’m trying to write in the same style. I just can’t do that. Growing up as a kid, I was raised all over the place stylistically, loving so many different genres.

“I’m so pleased with it. I recently had to organise the sequence of the record, and while I was doing that, I was thinking to myself, ‘Y’know, this is pretty frickin’ good.’”

Hart has a string of tour dates to come, including a UK run in November.