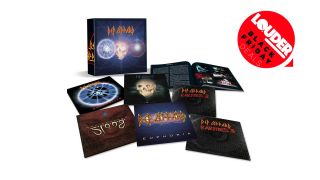 With the web currently littered with Black Friday Deals, it can be difficult to navigate your way through all the discounts. But if you're a Def Leppard fan, it's easy.

Why? Because the CD version of Volume 2, the second in the band's run of career-spanning box sets, has been reduced in price at Amazon. Formerly retailing at £63.17, it's now down in price to just £39.99.

Black Friday deals from around the web

Amazon.co.uk - new Black Friday deals every day
Adidas.co.uk - save up to 50%
AO.com - Black Friday deals on appliances are live now
Argos.co.uk - top savings on toys, TV and more for Christmas
Boots.com - save up to half price on selected items
Carphone Warhouse - early Black Friday phone deals
Converse - save 20% off Chuck 70s.
Currys.co.uk - Black Tag sale is now on
DNA Fit - up to 40% off DNA test kits
Dr Martens – Black Friday offers coming soon
EMP - for merch and rock'n'roll clothing. Save £20 on orders over £85
Etsy – original and collectible gift ideas
Firebox - crazy gift ideas and the world's smallest turntable
Google Store - a boatload of deals - including £70 off Pixel phones
Halfords - 20% off dash Cams, electric scooters and way more
I Want One Of Those.com - daft gifts and cool tech
John Lewis - Get great warranties with John Lewis' Black Friday offers
Lovehoney.co.uk - up to 50% off sex toys and more
Marshall - Black Friday sale coming soon
Mobiles.co.uk – cheapest mobile phone deals
Nike.co.uk - up to 30% off full price items
Nixon - home of the Metallica watch
PureScooters.co.uk - up to £500 off electric scooters
Simba Sleep save up to 40% on mattresses for Black Friday
Superdrug - top Black Friday deals at Superdrug
Townsend Music - Up to 75% off CDs and Vinyl
Very.co.uk - big savings on tech and more