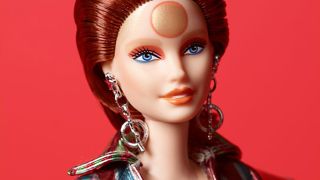 Mattel have announced they’re to release a limited edition Barbie in the guise of David Bowie’s alter ego Ziggy Stardust.

The toy manufacturer have released a series of pictures of the doll which comes complete with red hair, metallic jumpsuit and Ziggy make-up.

The Bowie Barbie will retail for $40 and will come with a stand and certificate of authenticity.