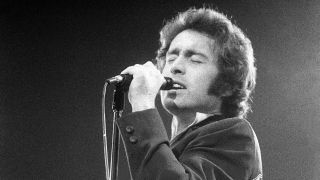 Bad Company have released a live version of the classic Can’t Get Enough. It’s taken from the upcoming live album Bad Company: Live 1977 & 1979, and was recorded at London’s Empire Pool (now Wembley Arena) in 1979 on the Desolation Angels tour.

The album is the only Bad Company live album to feature the original line-up of Paul Rodgers, Mick Ralphs, Simon Kirke and Boz Burrell, and features two previously unreleased concerts – the Wembley show, and one recorded at the Summit House in Houston, Texas, in May 1977. Both recordings were taken from original 24-track master tapes, and have been released as-was, without any overdubs being added.

The album also also includes the a cover of the Hey Joe, recorded in March 1979 at the Capitol Center in Washington, DC.

Live In Concert 1977 & 1979 is released on April 29. It will also be issued as individual double vinyl sets later in the year. The band have previously released live versions of Shooting Star and Rock’n’Roll Fantasy.