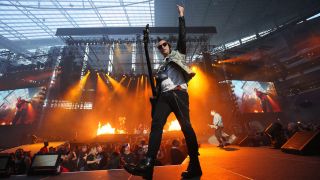 Avenged Sevenfold bassist Johnny Christ says the band are playing the long game when it comes to sales of their new album The Stage.

The band sneak released the album in October with little promotion and after an elaborate ploy to create a smokescreen and, as a result, early sales figures have not been encouraging. But Christ insists the band always knew that would be the case and that they are more interested in long-term results than short-term sales.

He tells Kaaos TV: “When you run that risk, you kind of know it’s gonna happen. For us, it wasn’t so important where we started but, ‘Let’s see where we finish’ kind of feel.

“We wanted to do something cool and different, and we were able to accomplish that. We were well aware of the risk going into it, and now that it’s happened, and now that we’ve seen pretty much where we ended up after the first couple of weeks, now we’re ready to go out there and kick some ass on the road and see where we finish with this thing.

“We had that plan in motion when we were writing the record, pretty much. We wanted to do something different and have a surprise release.

“It went off really well – better than we could have hoped. And there was no leaks. We got to do the surprise release, which I think was an exciting thing for our fans.”

He continues: “The importance of first-week sales has kind of diminished, in our opinion, in the industry, and we don’t really know what it really means anymore. It is what it is in the industry. And for us, it’s all about the endgame, not where it begins.”

Avenged Sevenfold are the cover stars of the new issue of Metal Hammer magazine. Issue 291 is available now in print and via TeamRock+.