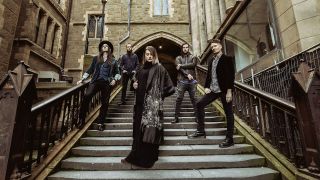 Australian prog rockers Acolyte have returned from a recent two-year hiatus with a striking cover of Billie Eilish's theme tune for the upcoming James Bond film No Time To Die. The new cover gives fans a chance to check out the band's new guitarist Brandon Valentine. You can watch the video for No Time To Die in full below.

"Billie has achieved the same in our opinion in the pop genre on a worldwide platform," explains vocalist Morgan-Leigh Brown. "We chose this song as the collaboration with Hans Zimmer allowed us to re-explore a dynamic cinema orchestration led with a strong but emotive classical vocal line. After completing our record and seeking to re-engage with our fans it was a natural pivot for us - and fun to show that we can quite easily blend and bend genres. Our music really has something for everyone.”

Acolyte released their debut album, Shades Of Black in 2016, of which Prog Magazine said "Acolyte show real adventure, taking the fans across so many different feels & textures it makes ones head spin." They toured their native Australia supporting the likes of Voyager, Leprous, Twelve Foot Ninja and more.

The band have recently been working on their second full length release.

“We wanted to be confident in delivering every aspect to the high level we expect from ourselves - and equally what is expected from those who already know us," the say. "With the team that now surrounds us, we know and trust that now is the right time for us.”