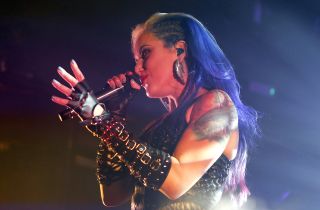 Arch Enemy’s Alissa White-Gluz has given an update on how work on her debut solo album is progressing.

The singer signed with Napalm Records in September 2016 and revealed that Arch Enemy members past and present would appear on the album which is titled Alissa.

Speaking with Music Feeds, she says: “I like my band, but, as many of you know, Sharlee D'Angelo and Mike Amott have Spiritual Beggars, Jeff Loomis has solo music and Daniel Erlandsson has other projects as well.

“So all of us have side projects and this is sort of a side project for me to do when Arch Enemy does inevitably take a break at some point.

“We always like to keep our brains brewing, and I think it's healthy to explore another side and not just have it only focused 100% percent on Arch Enemy.

“So that's something that I'm doing whenever I have time. I'm in the process of writing and demoing right now, and I'm collaborating with a bunch of friends who are also peers in other bands.

“I'm just looking forward to getting that out there.”

Speaking about the solo album in 2016, Gluz said she was under no pressure to play a particular style of music, adding: “I also pay close attention to what my fans want – I haven’t been ignoring the consistent requests for my clean singing voice!”