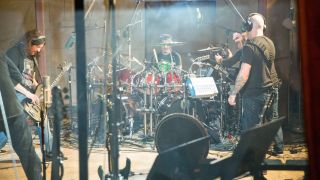 The drummer and his bandmates are putting the finishing touches to what will be their 11th album and the follow up to 2011’s Worship Music.

Benante tells Bravewords: “Worship Music started a new chapter in our career, and it has served as an inspiration for this new album. Worship was made up of a lot of different types of songs, some thrashy, some very mid-90s Anthrax-sounding, but this new one is really thrashy.”

The band brought 20 tracks to the studio and Benante previously said they had enough material to put out a double album. The as-yet-untitled record is expected to be released later this year.

Mainman Scott Ian says the new material is “angry” and adds that singer Joey Belladonna has helped the band feel more like a team than ever before.

He says: “The lyrics I write tend to go along with the way the music sounds, and this new music is very angry. Lots of people said that Worship Music was a return to the roots of the band. Well, this record is even more so.

“Unlike Worship Music, we wrote this new album with Joey in the band, and that has made all the difference.

“Joey being part of the band again, going on five years already, it definitely feels like a unit. Everything that was great about him on Worship is there even more on this new record.”

Anthrax recently contributed a track to the new Games Of Thrones mixtape collection.