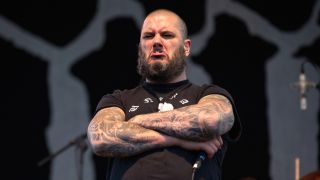 The former Pantera frontman believes album’s are a “thing of the past” and adds that he will continue to release music in the shorter EP format, as is the case with 2012’s Down IV Part 1 and the band’s latest release, Down IV Part 2, released earlier this month.

The diminished attention span of the average music fan and the busy schedules of the members of Down are the main reasons for Anselmo’s favouring of the EP over the album.

Anselmo tells 94.9 K-rock: “Everyone’s attention span these days is a little shorter. Honestly, for me, doing a full-length record is a thing of the past. I’m not doing it again. It’s boring. If I can concentrate on making five or six songs the best I can, that’s the way I would prefer to release it.

“On the first three records, it took us five years between every record to put them out, so doing it in the EP formula helps us get it quicker to people. Not so much stress on everyone. At the end of the day, Down is still made up of a bunch of other bands.

“The new Eyehategod is coming out and Jimmy is going to be busy with that. Pat does a lot of grindcore stuff. Pepper does all kinds of stuff. I do the Illegal and run the record label and all. We all realise every one of us has other things. But when it’s Down time, it’s Down time. We all commit.”

Anselmo adds that the relationship between him and his former Pantera bandmates is cordial and that he remains in touch with Rex Brown and Vinnie Paul.

He says: “We are all attached via e-mail. I don’t answer back much unless there’s a decision or they need an answer from me on if something is cool or whatever. Rex and I keep in touch.

“I love Rex. I love Vinnie. I love them both. Vince is the captain of his ship right now and he does what he does. I’m not going to judge a man by his life or decisions. I’ve got my own fucking ship to steer. Rex and I are in contact. I respect Vince and his decisions. Love is the law. Love under will.”

Earlier this month, Anselmo said he would be up for recording new music in tribute to murdered Pantera guitarist Dimebag Darrell.