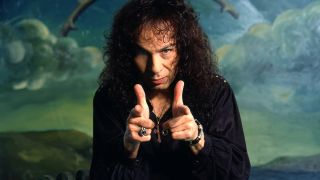 This year’s Bowl For Ronnie event raised more than $50,000 for the the Ronnie James Dio cancer fund.

Stars from across the rock, metal and films worlds joined the late vocalist's widow  Wendy at the PINZ Bowling Center in Studio City, California, earlier this month for an evening of 10-pin bowling, fun, food and a raffle to aid the Ronnie James Dio Stand Up And Shout Cancer Fund.

The event was hosted by SiriusXM’s Eddie Trunk, who was joined by more than 300 rockers including Geezer Butler, Dave Grohl, Steven Adler, Phil Demmel, Richie Kotzen, Rudy Sarzo, Brian Tichy and Scott Warren, while no.1 bowler in the World Professional Bowling Association Jason Belmonte rolled out the ceremonial first strike.

Foo Fighter Grohl said: “Ronnie James Dio – one of the greatest singers of all time, a very generous and sweet man who would give all of his time and energy, love and attention to do good things.

“Wendy is the sweetest woman in the world. When Wendy comes to you and asks you to do something, you kinda can’t say no.”

He adds: “My father died of cancer – I know a lot of people that have passed away from cancer and to help fund research and awareness, I think is a good thing. You forget about that when you show up at a bar with all your friends and go bowling, but we’re here for a real reason – but it’s also really fun.”

On the night, the fund presented Dr David Wong with a cheque for $25,000. He and his research team at the UCLA School of Dentistry are working on a non-invasive saliva swab test for early cancer detection.

A video from the evening is also available and can be watched below.

Earlier this month, it was announced that newly remastered deluxe editions of a selection of Dio’s studio albums will be released in 2020.