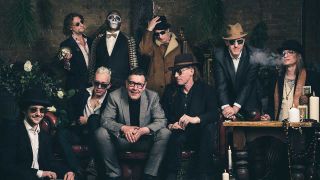 Alabama 3, whose frontman Jake Black a.k.a. The Very Reverend D.Wayne Love died earlier this week, have vowed to finish their current tour.

In a statement on Facebook, the band say, "At the height of our mourning for our dear friend and comrade Jake Black, who died on Tuesday, we were faced with certain urgent and difficult decisions, not least the question of whether we should play the two forthcoming shows this weekend.

"We have only just started to process our grief, or even begin to think about the impossibility of filling the massive hole that Jake has left behind. There has been a strong argument within the band that we should pull these shows as a mark of respect.

The band go on to state that Black would never miss a show, saying, "Aside from being in hospital with pneumonia, we can assure you, whatever heavy shit he had to deal with, not least the loss of many of his own friends and lovers, he would be there on stage for you. It was a point of pride.

"We can also tell you that he would laugh at us if we wallowed in sentimentality, and berate us for letting down fans who loved him."

The band also appealed to fans to pay tribute at the two remaining shows, on Friday night at The Riverside in Newcastle, and at the Vibration Festival in Falkirk, Scotland, on Saturday. "So please all of you who are coming, help us get through this, and join us this weekend in Newcastle and Falkirk to celebrate the life of our friend, the unique and irrepressible Jake Black."

The band are also due to headline the 500-capacity Outcider Festival at Compton Martin, near Bristol, on August 2, and have four shows in December booked to celebrate the classic 1997 album Exile On Coldharbour Lane. The band have not yet confirmed if these shows will go ahead.

Black died after a performance at the Highpoint Festival in Lancashire. A cause of death has not yet been announced.