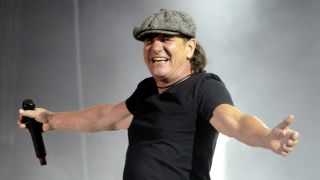 AC/DC singer Brian Johnson has recorded guest vocals on US comedian and impersonator Jim Breuer’s rock album – and it led to confusion during the session.

The comedian, known for sounding like a number of big-name singers, says his spoof Johnson vocals caused some head scratching during playback.

Breuer says via Blabbermouth: “It was me, him, the producer and one other guy. We’re listening to the song and none of us knew who was doing the lead. I went, ‘That’s Brian.’ Brian’s like, ‘No, that’s Jimmy.’ I’m like, ‘No, Brian, that’s definitely you.’ He’s like, ‘Fuck, no – I know my voice. That’s you, Jimmy.’ We had no clue who it was.”

But the radio presenter says he was blown away by Johnson’s grace and style when he arrived to lay down his track. He recalls: “Brian comes in and goes, ‘I’m ready to go,’ and we go, ‘We’ve got this studio.’

“He goes, ‘Fuck, I ain’t going in there – I want to do it right here in the fucking boardroom. And I don’t want headphones. That’s cheating. I want to stand here with a mic like I’m on stage.”

Breuer describes Johnson’s track as “perfect for him.” The album is being produced by ex-Anthrax and current Volbeat guitarist Rob Caggiano, and it’s expected before the end of the year. AC/DC return to the UK next month: