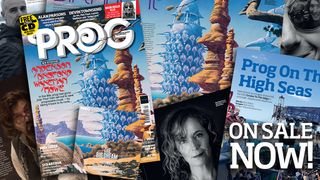 The new issue of Prog is on sale today! We celebrate the 30th anniversary of the Anderson Bruford Wakeman Howe album, with brand new interviews with all four band members recalling how the project came together, recording the album, the ensuing tour and what happened next...

Devin Townsend - reveals all about his impressive career in The Prog Interview.

O.R.k. - the prog supergroup discuss signing with Kscope and their new album Ramagehead.

Cosmograf - Robin Armstrong explores everything from Jaws to mental health on his latest album.

Theo Travis - the Soft Machine saxophonist reveals a glimpse of his prog life.

Cruise To The Edge - Prog takes to the high seas with a report from this year's Cruise.

And music from Voyager, In Continuum, Rhys Marsh, Fervent Mind and more on the free CD.