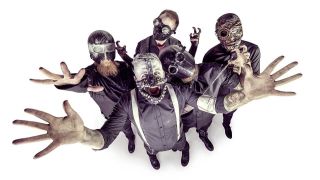 Nu metal didn’t die. It just went to sleep for a bit. Regardless of how you regard the era of Korn and Limp Bizkit, its influence remains huge and, every now and then, a band comes along that gets what made those bands exciting first time round. Anti-Clone are just that: a contemporary band that wear their nu metal influences (and grotesque masks) with pride.

“We needed to create music we wanted to hear,” singer Mr Clone tells Hammer. “We wanted to have a voice, we wanted to put the unknown, weird and crazy back into metal music. It’s always been a passion and, like most musicians, we’re inspired by the bands we grew up with. Nu metal was the most creative metal has been. It pushed boundaries to every extent.”

Crowds pick up on our frantic energy

Having toured with Skindred last winter, Anti-Clone have already seen how open audiences are to seeing a band with a little theatricality and metric fucktons of nu metal braggadocio.

“The biggest thing you can count on with seeing us live is that something unpredictable will happen,” says Mr Clone. “We seem to convey this frantic energy, which the crowd picks up on and that’s resulted in some mad stuff. We’ve had people crowdsurfing from speaker stacks, human pyramids and a circle pit that runs around the entire venue.”

Funded via Pledge Music, Anti-Clone’s forthcoming album The Root Of Man was recorded with studio guru Matt Hyde (Machine Head/Slipknot) at the controls (“He just oozes creativity!”) and looks likely to be one of the year’s most distinctive debuts.

“We want to play as many shows as we can,” the frontman says. “You’ve just got to write from the heart, mean what you say and believe in what you’re doing.”