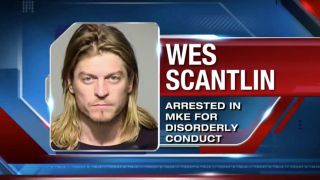 If you’re concerned about people stealing your car, maybe get a steering lock or park it a garage. Don’t do what Puddle Of Mudd frontman Wes Scantlin did. This week, he tried to a make a fake bomb to scare off any would-be thieves and caused his entire neighbourhood to be evacuated.

Scantlin used enjoying the trappings of a rock star lifestyle after achieving massive success with singles like Blurry and She Hates Me. But then the Missouri band’s fortunes started to slide. But that hasn’t stopped him hitting the headlines, though – albeit for all the wrong reasons…

Let’s go back to a time when Scantlin was genuinely famous. In the spring of 2002, he and his fiancée Michelle Ruben were both arrested for investigation of domestic violence and taken to the Ventura County jail in Fillmore, California. Neither were charged.

After a few quiet years, Scantlin found himself on the end of a permanent ban from Elvis Presley’s home after entering a swimming pool that was off-limits to the public. “We were just being dumb little rock stars,” he protested after the incident, dripping all over the foyer.

It was revealed that he was pursued by the Internal Revenue Service for taxes in the region of $60,000. A drop in the ocean after all those She Hates Me royalties, probably.

In January 2012, Scantlin was pulled over by police in Culver City, California for a minor traffic violation. After showing signs of intoxication, the officers searched his car and found cocaine. He was also charged with driving without a license and being under the influence of a controlled substance. Scantlin only escaped a potential five-year jail sentence after agreeing to attend a drug counselling programme. Because that’s going to work.

6. September 4, 2012 – Arrested for public intoxication on a flight

The rest of the year was going so well until he boarded a flight to Los Angeles. The aeroplane was forced to make an emergency landing in Austin, Texas, where he was arrested for getting into a verbal fight with a flight attendant. An airport security source told TMZ that the singer was ‘upset because the flight crew wouldn’t sell him booze’. Nothing like a 40-year-old man having a tantrum thousands of feet above the ground.

Scantlin’s first brush with the law in 2013 concerned two outstanding warrants, including driving with a suspended license and one concerning his previous cocaine arrest. He was released on $11,176 bail. So much cheddar.

TMZ reported that police were called to a Hollywood address after someone said “Scantlin shook his ex-wife and then tried to drag her by the arm or the shirt”. The frontman was described as “very mouthy” when officers arrived on the scene and arrested him. In the van. Watch your head.

Wes – who surely must be on first-name terms with the officers at his local precinct – was arrested on charges of felony vandalism after he took a chainsaw to some property. “My neighbour vandalised my house so I had to take action,” he said leaving the station the following day. Rational.

A new year brings the chance to start afresh. Doesn’t it? Does it fuck.

During the show, Scantlin threw a microphone and a beer into the crowd. Some fans said he appeared to be lip-syncing as well. Which, in rock, is a crime worse than anything.

The 42-year-old was cuffed after taking joyride on baggage carousel and ended up in a restricted area. American airports aren’t keen on people mucking about. He was bailed later that night, resulting in that evening’s gig running late.

During a live performance in Scottsdale, Arizona, Scantlin smashed up his guitar, headphones and part of the drummer’s kit. Rock’n’roll!

This time, Scantlin ruined his own day while traveling through the Mitchell International Airport in Milwaukee, Wisconsin. He was arrested for disorderly conduct, although the sheriff would not go into the charge’s details. Although we bet he thought he was acting like a dick.

A gig at an indoor speedway in Versailles, Ohio didn’t go to plan. Some fans said the singer was drunk, sat down a number of times during the show and appeared to be miming to the songs. The band’s official Facebook page was deleted shortly after the concert.

He was involved in a drunken 100mph police chase and was charged with DUI and fleeing a police officer in a motor vehicle. When questioned, police say Scantlin was slurring his words and had “very watery and bloodshot eyes”. A bit like a bloodhound after hitting the bong.

Scantlin got to see what the inside of a police station in South Dakota looked like after he was arrested for driving under the influence. He pulled over by police early on Wednesday morning for speeding and was also cited for possession of marijuana. He was released on $500 bail and performed with his band that night.

18. December, 2015 – Arrested for possession of a controlled substance

On December 26, it emerged that he’d had another run in with the police for having an expired car registration. Then police discovered a controlled substance in his car. He posted $51,000 and was released that day. Happy Christmas.

Another new year, another fresh chance to completely balls things up. This time, he was cuffed after trying to re-enter a property he’d had repossessed and destroying items inside. He was charged with felony vandalism and the two people with him were charged for trespassing. I bet they loved his offer of a ‘night out’.

During a gig in Marietta, Ohio, the troubled frontman paused a song to accuse a fan of stealing his home, then leaving the stage. Marietta, there will be no encore.

TMZ reported that a call about a car in Scantlin’s driveway led to the Los Angeles Police Department bringing out the big guns after the frontman ran into his house and refused to come out. After two hours and 30 armed officers, the singer emerged but was not booked for the incident. Someone must have bought Come Clean and took pity.

Scantlin was left onstage by his band after some drunken meltdown during a gig at Doncaster’s Diamond Live Lounge. Watch the shambolic evening unfold below and hear one person shout “Fuck you, Wes” over and over. It’s like an angry mantra.

Another gig, another shambolic mess. This time, it was Gloucester Guildhall’s turn to see the former star unravel. “Fantastic venue, and great staff as always, just let down by a singer who couldn’t seem to give a shit,” said one fan. Nice to see someone recognise a rock venue’s hard work and good customer service.

Scantlin was arrested following a show in Hermosa Beach, California. This time, it was for not attending a court date relating to his trespassing case from earlier in the year.

In his latest stunt, Scantlin’s plan to scare off car thieves from his West Hollywood home with a fake bomb backfired when it sparked a neighbourhood evacuation. Though Scantlin was bollocked by police, he was not charged with a crime.

Puddle Of Mudd are on tour now.