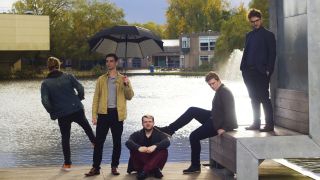 Sounds like: Classic 70s prog with a twist of modernity

Current release: Emperor Norton is out now and is self-released

The longevity and ongoing inventiveness of the progressive genre remains startling and the current wave of younger bands all vying for attention seems unabating. What’s perhaps more surprising are the musical reference points and influences which seep into the music, with young bands often referencing albums which are well over 40 years old. Emperor Norton are no exception, with the source of their inspiration often coming from surprising sources.

“At the age of 13, I was listening to the sort of music that a skateboarding kid would until one day my grandfather put on Close To the Edge,” recalls guitarist Scott Neumann. “He told me to have a listen to it and it just made my mind explode. We never wanted to be copycats or be accused of simply parroting bands that have influenced us. One of the ways we addressed that was to explicitly reference those influences, so for example, there’s a guitar line on one of our tracks which is from Close To The Edge. We just wanted to celebrate the music that we enjoy. But I would say that at no point did we sit down in say the first session and discuss what music we wanted to write. We just played what we liked.”

“We all have a lot of old influences, despite being fairly young for a prog band,” suggests singer Matthew Corry. “We take our influences from bands like King Crimson, for me Frost is a big one, and there’s Yes and Gentle Giant. We wanted to evolve that music as best we could and develop that sound, as that’s the music which means so much to us.”

Emperor Norton formed in York at the end of February 2017, and quietly honed their material before trying to develop a momentum on the live circuit. Their first gig was supporting Syd Arthur, which Corry describes as a “pretty horrible” experience, with a poor sound hampering their determination. However, despite their troubles, the crowd reaction was positive, which encouraged them to press ahead with their approach.

“A lot of the places we were trying to get gigs in were refusing to let us play because we didn’t have a recording,” recalls keyboard player Marc Green. “We did a really rough and ready recording and then got a gig. Then we were all aware that we needed to record it properly before we moved on to the next stage.”

The result is their engaging self-titled debut album which was released earlier this year, and it’s a recording which has already garnered a number of positive reviews, much to their entertainment.

“The feedback has been unexpected and overwhelming,” says Corry. “We got a comment on YouTube where one of our tracks was compared directly to 2112 by Rush. I mean, we really don’t deserve that, but people seem to genuinely like the music.”

The band have already gathered together material for another album, which is slated for release next year.