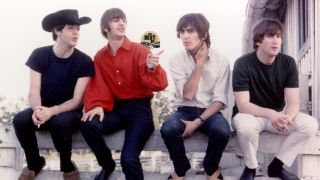 I grew up in a very musical home. My father was a music teacher – although he’s retired now – and his all-time favourite band was The Beatles. So I have the same sort of relationship with The Beatles that I imagine most English people do.

Right up until the age of around 16, I couldn’t even listen to some songs because they would make me physically sick – there was a strangeness to the way that they made me feel. And then sometimes, The Beatles can sometimes sound banal – the way U2 sometimes do – because they set a standard that has been so copied and watered down that you fail to realise there’s something revolutionary in their music, once you scratch beneath the surface.

What I love about The Beatles is that they did so much in a short space of time. They just did whatever the hell they wanted to. And I love The Rolling Stones as well, but when you compare their music with The Beatles, it’s a laugh: The Stones have good songs, but The Beatles have very, very good songs.

There’s a sheer beauty to The Beatles’ music and they have a universal appreciation. Just like Elvis Presley, everybody all over the world knows and loves The Beatles. If you say you don’t, then you’re a liar.

**10. LET IT BE **(Let It Be, 1970) Given when this song was recorded and the situation of The Beatles at the time, when they were on the verge of breaking up, to go in to the studio and record this comforting hymn was such a powerful statement. It’s like an old man that knows that he’s dying – that’s why I love this song, other than the melody and the way that it sounds, it’s what they were singing about as well.

9. I’LL BE BACK (A Hard Day’s Night, 1964)
This is an older song which was recorded around the time they were starting to experiment and not always sing about love and girls. It’s a rather sad song too, that switches from minor to major key, and vice versa. It’s got a very haunting vibe that gives across such a strange feeling throughout the whole song.

8. YOU’VE GOT TO HIDE YOUR LOVE AWAY (Help!, 1965)
This is a beautiful song and it has that specific John Lennon sound to it. His voice cracks in a certain manner that I just love – I don’t know what it is or how he does it, but it’s very beautiful.

6. WITH A LITTLE HELP FROM MY FRIENDS (Sgt. Pepper’s Lonely Hearts Club Band, 1967)
I’ve been listening to this song all my life without even knowing that it was The Beatles. It was the Joe Cocker version from Woodstock that first switched me on to it, and then I just started to look around for other versions. That’s when I realised The Beatles did it originally. I love their version, and the fact that it’s Ringo singing it is beautiful.

5. HEY JUDE (1968)
I was never too fond of the opening part of Hey Jude, or even the first half of the song. It’s the ending that I love. When all the parts come together, it’s a magical thing.

4. TICKET TO RIDE (Help!, 1965)
When I hear the opening of this song, it’s in some sort of twilight zone. It’s not even about whether I like the song or not, it’s just a big song that my mother used to play whilst she did the spring cleaning of the house, and it’s magical for that reason and so many more. This is a song that I pin The Beatles to the most. And whenever I hear it, I just see four young kids with the whole world at their feet.

**2. STRAWBERRY FIELDS FOREVER **(1967) I must have heard this song millions of times as an infant, and I hated it because it always gave me the shivers. I didn’t like it at all. Maybe it was wading something up in me, I don’t know. But then in my early 20s or some time around then, I sat down and listened to it and ever since then I’ve loved it. The turnings, the chords, and the soundscapes that they built with this song are phenomenal.

**1. WHILE MY GUITAR GENTLY WEEPS **(The White Album, 1968) This is a George Harrison song, off The White Album, and Eric Clapton plays the lead guitar part on it. It’s a very sad song, obviously, but it’s a good one, and it’s my joint favourite song of all time by anyone, ever – the other being Gimme Shelter by The Rolling Stones. It’s sincere, profound, and utterly incredible.

Listen to the 10 best songs by The Beatles on our Spotify playlist.

A Nameless Ghoul was talking to Matt Stocks. Ghost’s album Meliora is out through Spinefarm Records.

Ghost: A Day In The Life Of A Nameless Ghoul