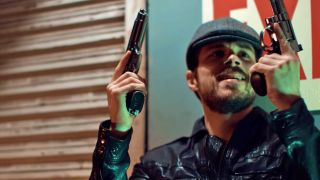 Queen’s original Bohemian Rhapsody film is one of the earliest, most iconic clips of the video age. Based on the image of Queen that adorned the cover of their second album — a picture inspired by a photograph of Marlene Dietrich — the footage of the band’s underlit faces has become some of the most recognisable in rock.

Another iconic use of the song comes in Waynes’ World, as Wayne and Garth and friends headbang along to the song in the duo’s Mirth Mobile, but what neither video does, however, is provide a literal representation of the song’s lyrics. This has all changed with a new video from YouTube collective Corridor Digital, who’ve taken Freddie’s original flights of lyrical fancy and turned them into a gritty crime drama that starts with a murder, continues with an emotional family confrontation, and climaxes with a dramatic stand-off with the police.

Perhaps disappointingly, the new video doesn’t include the “So you think you can stop me and spit in my eye” section of the song. “Partially time constraints,” says director Nico. “Only had a week to do everything for this video. But the other reason is that the lyrics become a lot less film friendly from there. Up to that point everything reads like an opera or play, but then it becomes a bit too song like to really keep it up.”

Either way, the new video is intense.