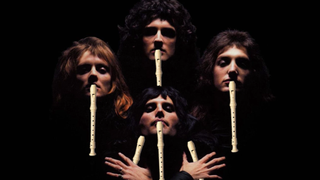 The recorder is the most hated of all musical instruments. The inexpensive member of the woodwind family makes it a favourite with all schools, and in the wrong, grubby hands, can often sound like a bird-of-paradise being punched repeatedly in its tiny bird-of-paradise face.

If you grew up in Britain, you’ve probably been forced to learn how to play one. And if you have, you’ll remember the smell of that whistle mouthpiece. Oh, that smell. How else would you collect several years of crisps and pop-tinged spittle and let it fester in the dark recesses of an already stinky sports bag? It’s a heady scent that would challenge even the most hardened of crime scene cleaners.

Simply put, this piercing, budget flute is nothing but a tool of the Devil itself.

Which is why the idea of covering one of Queen’s greatest moments with an ensemble of recorders could be considered musical blasphemy. And it’s all down to a YouTuber who calls themselves, quite aptly, Shittyflute.

“In my channel you will find the shittiest flute covers and some kazoo as well,” reads their bio. “I am happy to make your day happier and your ears hurt. Bohemian Rhapsody has been requested a lot, and since I passed 30,000 subscribers – 30,000 brothers and sisters in shit – I thought doing this will give the song the respect it deserves. Well, sort of.”

Listen to the cover and see how long you can last without thrusting pens into your ears.