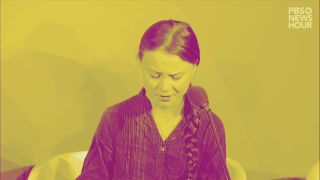 Despite it's rather morbid title, death metal is perhaps the most ethically conscience sub-genre within the metal scene. Bands like Cattle Decapitation and Carcass have been using their music to fight against animal cruelty and the meat industry since the formations.

Napalm Death's Barney Greenway is a staunch veggie, Bolt Thrower's Jo Bench and many, many more extreme metal musicians have traded in the steaks for a good wholesome veggie burger.

But it's not just in metal that we are having these conversations about environmental ethics, in fact, it's finally gone pretty mainstream.

In August 2018, at 15 years old, she took time off school to demonstrate outside the Swedish parliament, holding up a sign reading "Skolstrejk för klimatet", translated in English as "school strike for the climate".

From there, her popularity sky-rocketed, with many other young people getting behind her cause, and spurring an entire international movement: The school strike for climate or 'Fridays  For Future'. And Greta, of course, is a vegan too.

With Sweden being such a forward thinking and progressive nation, it is no surprise that such an inspirational and revolutionary mind was spawned from the Scandinavian country.

However, wouldn't it be even more incredible (and well, Swedish) if we could marry this incredible young lady's arousing speech with the one of the most progressive,  environmentally aware and quintessentially Swedish genres of metal? Death metal, of course! Swedish Death Metal to be exact...Well, yes it would.

One absolute genius by the name of John Mollusk has done just that. Uniting Greta's iconic speech with absolutely crushing death metal – and her words work so well you'd be forgiven for thinking they were written with the intention to be snarled a-top down-tuned guitars and blast beats.