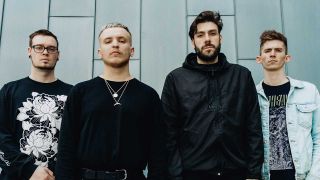 Godeater – All Flesh Is Grass

Climate change is a big topic at the moment. David Gilmour donated profits from his recent charity auction to the cause, Swedish teenager Greta Thunberg is making headlines with her no bullshit approach to schooling the US government bigwigs, earning herself Amnesty International's most prestigious human rights award: the Ambassador of Conscience, and the latest UN Climate summit has only just come to a close.

We are apparently in a 'climate crisis', something Scottish technical death metal outfit Godeater are very concerned with – so much so, that all members are veggie or vegans.

The Scots' latest album, All Flesh Is Grass, deals with the negative effects of climate change and the meat industry. Check out the exclusive premiere of the entire record below:

Godeater believe it's important for bands to use their voices proactively, and do so with their own lyrical content – but they aren't the only metal act to use their stage as a platform.

We asked vocalist Josh Graham to pick his favourite, and most inspirational, metal bands, all of which share Godeater's environmentally savvy values.

No other band capture the horror aspects of climate change and industrialisation so well - married with their intense and totally gross artwork, the feelings of contempt and disgust in their lyrics are undeniable.

Although Cattle Decapitation’s music is incredibly bleak there’s also this black humour that runs through its veins which I love. It’s a regular point of contention between myself and Andy (MacDonald, guitar) about which of their last two albums is their best, but they’re both modern classics.

Unquestionably the band that pushed me over the line when making the switch to veganism is Architects, they’re a band who have resonated with me throughout my formative years as a heavy music fan.

With Sam Carter being an ambassador for Sea Shepherd, I think they’re an extremely important example of how to use your platform as an artist.

Rage Against The Machine

Although they’re not best known for tackling climate change, Rage Against The Machine's contribution to protest music as a movement can’t be ignored. Something I’ve always admired about them is their ability to mix massive hooks with a very specific message.

There’s nothing vague about what they’re trying to get across and I think that’s something that’s missing from a lot of political music. Also Evil Empire is their best album, I don’t make the rules.

People generally associate Gojira with the ‘WHAAAAALES’ meme, but if you look at their music all the way back to Terra Incognita, there’s always been something inherently spiritual and organic about their music.

On record they’re one of my favourite bands of all time but when you see them live they transcend just being four dudes on a stage. It’s a completely moving and transcendental experience.

They really mean it and they always have. Also, if we’re talking about 'vegan' lyrics, find me something more badass than 'no other blood in me but mine' in their song Silvera. You can’t.

Fit For An Autopsy

I think Fit For An Autopsy are another band who use their platform very effectively.

They did a video for the song Black Mammoth from their last album, and it was basically a documentation of the Dakota Access Pipeline protests. The video shows in no uncertain terms the plight of the Sioux tribe and the animals that reside in the Standing Rock reservation.

It is - to put it plainly - absolutely sickening to watch and informed me about something that I had had no idea about beforehand and got me to look into it further. To me that is what any band wanting to take a stance on a serious issue should strive to achieve.

Godeater's latest album All Flesh Is Grass is out Friday September 27 and available to preorder here.