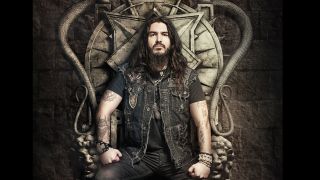 The long-awaited follow up to Machine Head's Unto The Locust is coming our way on Monday, so to get your ears all excited and giggling like schoolkids we thought we'd run through it track by track to let you know what you're in for.

You can read our exclusive interview with the Machine Head frontman in the new issue of Metal Hammer now.

Unless you’ve been living in an isolated cave in Siberia, with no electricity and awful taste in music, you will already have heard this thunderous opening track. Seven minutes of prime Machine Head at their crushing, adventurous best, it’s an instant classic that already sounds as timeless and thrilling as Davidian, Imperium or Clenching The Fists Of Dissent. Modern metal seldom sounds any more distinctive or powerful.

The first song to be released from Bloodstone & Diamonds, albeit in slightly more primitive demo form, Killers & Kings was aired on Machine Head’s recent run of intimate UK dates and it was routinely greeted like an old friend. Does anyone else channel the ferocity and might of classic thrash in such an effective and idiosyncratic way? The answer you’re looking for is FUCK NO. Brutality and melody in perfect, riotous harmony.

Ghosts Will Haunt My Bones

One of Machine Head’s greatest strengths is their ability to maintain obscene levels of heaviness while weaving vast quantities of subtlety and texture into their songs. Ghosts… is a sublime example of that skill in action, with its brooding, melancholy verses, monumental crescendos and a chorus that instantly demands raucous audience participation. It’s six minutes long but feels like half that amount. Immense.

If you’re going to sing about Charles Manson and his murderous legacy, you’d better make it ugly and violent. Fortunately, Machine Head do ugly and violent much better than most and Night Of Long Knives is arguably the most grotesque and scabrous seven minutes in the band’s career to date. There’s plenty of high velocity thrash here, but also some massive grooves and a vocal performance from Robb Flynn that sounds like he was spitting blood and shards of teeth at the microphone throughout.

Sail Into The Black

Bloodstone & Diamonds’ biggest epic is also the album’s most affecting moment. It begins with an ominous chorus of resonant vocal bass tones, redolent of chanting Buddhist monks, before morphing into a slow-motion blizzard of solemnity and disquiet, replete with quasi-choral backing vocals and a spine-tingling change of focus midway through that eventually erupts into flat-out metallic glory via a scorching lead guitar break. It’s hard to imagine any other band attempting something like this, let alone pulling it off with such swagger.

Eyes Of The Dead

Another exhilarating blur of megaton grooves and blistering speed metal fury, Eyes Of The Dead sounds like another instant live favourite, not least because its numerous changes of tempo and pace flow so beautifully. Another incensed and utterly convincing Flynn vocal is just the icing on the cake.

Fucking CHRIST… THAT RIFF!!! Strap on a neck brace and wear your beard as long as possible for this one. Machine Head have never drawn directly from the grand Sabbathian well, but the opening riff on Beneath The Silt knocks the vast majority of stoner rock and doom bands into a cocked bong. What follows more than lives up to that overpowering intro, with deeply sinister verses mutating into a rampaging bridge and a chorus so brutally infectious that it makes Ebola look like a mild dose of the sniffles.

In Comes The Flood

One of the worst things about modern metal is the lack of bands with anything meaningful to say. Machine Head have never fallen victim to that all-pervading inanity, and In Comes The Flood proudly proclaims the band’s refusal to disengage their hearts and brains. A sustained diatribe against the shallow, dollar-grabbing idiocy of Western (and, in particular, American) society, its smart, heartfelt and incisive lyrics are matched by the nose-flattening grandeur of the band’s collective performance, which comes replete with orchestral and military trimmings that conspire to make the whole thing almost overwhelmingly potent.

A sombre, atmospheric and unusually amorphous moment of respite between In Comes The Flood and the devastating viciousness that comes next, Damage Inside exhibits a slender resemblance to the drug-addled moodiness of The Burning Red – and, it has to be said, The Cure’s Disintegration, which Robb Flynn has quite rightly praised on numerous occasions. Brief but impactful, this is a perfectly pitched and executed precursor to…

Holy shit. Machine Head may not be able to speak publicly about the fallout from Adam Duce’s departure from the band, but there are no holds barred whatsoever when it comes to Game Over’s lyrics. Over the top of some serrated-edge riffing and one of the most unashamedly mosh-friendly choruses Machine Head have ever produced, Robb Flynn pours scorn and vitriol on his former colleague and makes it entirely plain that this was a split that cut him, and this band, to the very core. But even without these lyrics, this would be an iron-plated classic. Try listening to it without smashing something. Bet you can’t.

A wonderfully subtle and intricate instrumental, topped with some fascinating dialogue which – we think – has been taken from the Zeitgeist internet movies that Robb Flynn has already cited as an inspiration for parts of Bloodstone & Diamonds, Imaginal Cells once again demonstrates Machine Head’s disinterest in pandering to the narrow tastes of the metalcore generation. As essential to the flow of the album as any other track, this is the scintillating run-up to the grand finale.

Take Me Through The Fire

A mid-paced rager that brings Bloodstone & Diamonds to a suitably pulverising but substantial close, Take Me Through The Fire is another nailed-on crowd-pleaser, with more compelling riffs and moments of melodic might than most bands manage across entire albums (or, indeed, careers). It also boasts a ridiculously exciting mid-section where the whole band kick off, with riffs flying in all directions and the likelihood of major neck muscle damage writ large across every bruising note. As with everything else on this extraordinary album, it sounds like Machine Head and only Machine Head. And nothing else comes remotely close.

You can read all about the new album in our WORLD EXCLUSIVE interview with Robb Flynn in the latest issue of Metal Hammer and on TeamRock+.