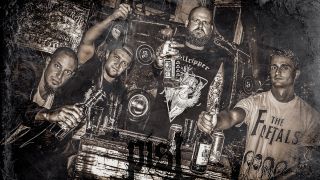 And after yet another tour with Goblin under their belt, the brutal doomers return with an album that aims to shed the stoner doom label they were quick to be stamped with.

The new record, Hailz, takes cues from their tour mates, blending that Goblin-esque powerful and riff-heavy doom with some more extreme metal influences.

Vocalist David Rowlands explains: "Myself and John (guitarist) had loads of ideas for riffs and basic structures however when we entered the jam room with these ideas and the four of us put our heads together it started growing and growing.

"I feel this record reflects more of our personal influences from shit like Darkthrone to Elder, Orange Goblin to Uada. Musically I feel it's a step away from the 'stoner doom' label we found ourselves with, something we've never considered ourselves to be, in our eyes we're a heavy metal, rock n roll band who listen to a fair bit of Black Metal and Punk.

"This is really reflecting in the songs on this record from ferocious black metal kicking your head in to chilled psyched out bits that make you feel like you're fucking floating or something."

Check out the first single, Mind Rotter, below, which David says, lyrically, is "about dealing with my utter contempt of the modern world. Hitting back at the absolute shite we’re fed on a daily basis and not accepting what the media, the government and people in positions of power tell us is the truth”.

We caught up with Pist guitarist John Nicholson to find out his favourite tracks from tour mates and inspiration the mighty Orange Goblin...

1. Some You Win, Some You Lose

"This was the very first Orange Goblin song I heard. I can’t quite remember how I found it.. probably by getting lost in YouTube during the early hours. I remember it being stuck in my head for days after first hearing it. It’s always a favourite when they play it live, catchy party banger and usually when my drunk mind thinks it’s a good idea to crowd surf. Sorry not sorry."

"In all honesty, I was pretty late to the Orange Goblin party compared to others due to being a fair bit younger than my band mates and most of my friends. Heavy metal was just a phase for my school friends. FUCK THAT.

"Anyway, after hearing Some You Win, Some You Lose I discovered Red Tide Rising. I got into Orange Goblin just before A Eulogy For The Damned Came out and this was one of the singles released from it. Instantly blown away and a great start to the album that was the turning point for me, that main riff is a beauty."

"After playing A Eulogy For The Damned to death I had to move on to their back catalogue, only to find more gold. At this point they were one of my favourite bands, and still are to this day.

"Everyone in PIST looks up to Orange Goblin and they’re a big influence on our sound and attitude towards music. After seeing them live countless times and in different countries it became clear this tune was a favourite for every fan, me included."

4. They Come Back (Harvest Of Skulls)

"This song didn’t really stand out to me until I heard it live. I listen back now and it takes me back to all the times I’ve been drunk as shit in the crowd absolutely loving it, stumbling about, fist pumping ROT.. RISE.. THEY COME BACK TO TAKE THE LIVING! Surrounded by people doing exactly the same. For that reason alone, I will always love this song."

"This one is all about the lyrics for me, if I’m having a shit day it just perks me up and helps me power through. Personal favourite track from the Back From The Abyss album. I don’t think I’ve ever seen them play it live though (if any of you are reading this.. sort it aat!)"

"I love this one purely for the guitar work, Joe Hoare & Pete O’Malley absolutely smash it. Chilled bluesy intro into pure Sabbath worship, I get more classic rock vibes from this one which is always a plus. The epic ending reminds me of Skynyrd too. Another solid tune."

"First song I heard from the latest album and it's an absolute stonker. When I listen now it reminds me of the dates PIST did as main support with them earlier this year which was a dream come true really, so it will always take me to a good place and bring back some of the best memories I have. Thanks again to Ben and the rest of the Orange Goblin guys for having us. Again and longer next time please!"

"Motorhead worship.. what’s not to love!? If you don’t like Motorhead or anyone paying tribute to one of the best bands to ever walk the earth, you need help!

"An easily relatable tune when it comes to partying which we all do far too much of! This song is just like.. fuck it, let's go mental. I love it!"

"Like all of their songs, they put me in a much better mood and always have. I think its because lyrically they make you feel a part of something. Whether it's a fan of heavy metal, a piss head or someone getting on with day to day life."

"Fast as fuck rager. Every album needs one. This one almost doesn’t sound like Orange Goblin but it blew me away when I first heard it. Makes you punch the air as fast as you can, so quick and to the point you can listen to it over and over."

Pist release their new album Hailz on 8th November through APF Records and its available to preorder now.