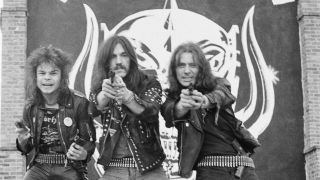 It gave a name to one of the greatest and loudest bands on earth, defined the man who wrote it as the epitome of the sex and drugs and rock’n’roll lifestyle, and had a profound influence on Metallica, Venom and Napalm Death. But when Ian ‘Lemmy’ Kilmister wrote Motorhead almost 40 years ago it was, he says, “just another song”. Nobody, least of all Lemmy himself, could have foreseen that it would become arguably the most important song he would ever write.

In 1974, Lemmy was 28 years old and the bassist in space-rock gurus Hawkwind. He’d been in the band three years, and had sung lead vocal on their biggest hit, Silver Machine, which had reached No.3 on the UK chart in June 1972. But as a songwriter he was feeling frustrated. “There was never much interest in my songs in Hawkwind,” Lemmy recalls wearily. Nevertheless, he stuck at it. And when Hawkwind reached Los Angeles on a 1974 US tour, he found the inspiration for a new song during an all-night booze and drugs bender.

The band were staying at the Continental Hyatt House hotel – nicknamed the Riot House, after the wild parties staged there by visiting rock stars – on Sunset Boulevard. It was the perfect setting for Lemmy to fully immerse himself in the rock’n’roll lifestyle – and to write a song about it. On the balcony that opened out from his room on the seventh floor, Lemmy wrote the song in a marathon overnight session fuelled by whisky and speed, using an Ovation acoustic guitar that he’d borrowed from Roy Wood, whose band Wizzard were also at the Hyatt.

“I don’t remember the exact chronology of the night,” he says, understandably given the circumstances, “but I was still up at seven in the morning, howling away at the top of my voice.” He also remembers seeing cars pulling up on the street below, as early morning commuters looked up open-mouthed at the screaming, long-haired lunatic apparently about to jump to his death. And yet there were no complaints from fellow hotel guests. “Mind you,” he says, “it was a lot wilder in them days at the Hyatt.”

What Lemmy bashed out that night was, in his words, “a basic rock’n’roll number”. And its lyrics were effectively a running commentary on the night’s events. The opening couplet placed Lemmy as a mad Englishman abroad: ‘Sunrise, wrong side of another day/Sky high, six thousand miles away.’ The refrain ‘Remember me now…’ was a reference to his many one-night stands. And the song’s title was adapted from American slang.

“A motorhead,” he explains, “is someone who talks all the time. I heard the expression and I thought it was rather apt.” Lemmy is also “very proud” of the fact that Motorhead is the first, and very likely the only, rock song ever to include the word ‘parallelogram’. Lemmy was surprised when Dave Brock consented to Hawkwind recording the song. They cut the track at Olympic Studios in Barnes, south London in January 1975, with Lemmy singing lead. And although that first recorded version of the song was a little sluggish for Lemmy’s taste, he did like the jazz-inspired violin solo by Hawkwind’s keyboard player, Simon House. Motorhead was chosen as the B-side on Hawkwind single Kings Of Speed. “How ironic,” Lemmy notes.

In May 1975, Lemmy was busted for possession of cocaine on the Canadian/US border, resulting in the cancellation of several Hawkwind gigs. And although he was released after the drugs found on him were identified as amphetamines – a lesser offence, for which the charges were dropped – he returned to London jobless.

Lemmy might have been down, but he wasn’t finished. And with a song that Hawkwind dismissed as no more than a B-side, he had the template for a new band. Having teamed up with guitarist Larry Wallis and drummer Lucas Fox, Lemmy originally named his new band Bastard. But, as he recalls: “A friend told him: ‘You probably won’t get a lot of Top Of The Pops action with a name like that.’ So I went with Motörhead.”

The name was perfectly suited to the band’s music: “Loud, fast, city, raucous, arrogant, paranoid, speed-freak rock’n’roll,” as Lemmy himself describes it. But it took a little time to really nail that sound – as illustrated by the band’s first recording of their signature song in 1976. To Lemmy’s mind, this version was “too slow”.

It was only after Fox was sacked and Wallis quit that the definitive full-throttle version of the song was recorded in 1977 by the classic Motörhead line-up of Lemmy, guitarist ‘Fast’ Eddie Clarke and drummer Phil ‘Philthy Animal’ Taylor. This version was recorded with the whole band – and their producer, the aptly named ‘Speedy’ Keen – all buzzing on amphetamines. “We were out of our heads,” Lemmy recalls. “Speedy did 19 fucking mixes of Motorhead and said: ‘Which one do you like the best?’ I just pointed at one and said: ‘That one.’”

This fast and loose rock’n’roll anthem resonated with punks and headbangers alike, and was a touchstone for many who followed in its wake.

“That song had a primal power,” says Napalm Death singer Barney Greenway. “It was fast, like it was about to come off the rails. It had a real ‘fuck it’ mentality. And it became a huge influence on punk bands like Discharge and metal bands like Venom and Metallica.”

“It’s just a song I wrote for Hawkwind, which was updated for Motörhead,” Lemmy says matter-of-factly. But for all his nonchalance, the bigger truth about Motorhead is that it changed his life.