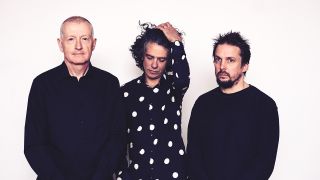 There's a feeling, when hearing members of The Utopia Strong talk about the process behind their self-titled debut album, that no-one's more surprised about how well it came out than they are.

With anecdotes that range from dancing around the studio hugging one another, quite unable to believe what they'd produced, to being barely able to play due to the excitement of the sounds coming out of the studio, the resulting album is a euphoric exploration of complex but accessible psychedelia.

Not that they should've been surprised by its success. Made up of one-part Gong alumni Kavus Torabi, one-part ex-snooker star-turned-synthesizer enthusiast Steve Davis, and throwing in the work of Michael York and his abstract instrumentation, their provenance was always guaranteed.

Here, The Utopia Strong talk us through their self-titled new album, one track at a time. You can also check out the video for new single, Strange Altar, at the bottom of the page.

Mike York: It seems fitting that this piece should open our album as it also marks the beginning of our creative musical relationship. This was the very first thing we ever recorded together, in fact it is the sound of the very first time we played together. We were all setting up the gear, and the transition from setting up to actually making music together was almost imperceptible. At one point I thought 'This is actually happening', and hit record. I also like to think this sets out one of our mission statements, that is to produce a psychedelic music that is at once accessibly friendly and perplexingly beguiling.

Kavus Torabi: Sometimes this is my favourite, it's so brief. You get a tantalising glimpse into this sort of green, slow motion, zero-gravity world surrounded by tentacle-like vegetation and by the time you realise where you are and that you'd like to stay it's evaporated, leaving you wondering if it was ever there at all.

MY: This started life as a sprawling 20-minute epic, and went from being what we considered our favourite piece to being almost abandoned for being entirely without merit. Then somehow we managed to find the perfect three-minute Krautrock pop track hiding in the middle of it.

There’s a moment towards the end that really emphasises the easy, ego-free, collaborative working relationship we have. Steve wrote a wooden whistle melody which I played, then Kavus composed a harmony part, also for the whistle. As we recorded it I could barely play I was laughing so much at how beautiful a collaboration it was and how euphoric a line we’d come up with.

Steve Davis: I think this will always remain one of our favourite pieces, but for a while we’d hit a brick wall in how to shape it from its long form improvisation into a defined piece. The making of this album has been my introduction to the world of editing, mixing and production, and it was an eye-opener watching Kavus and Mike wrestling with certain problems within our original recording of Konta Chorus and then finding a pathway to success. We were euphoric once we realised we’d cracked the conundrum. It was maybe a defining moment for our band that we managed this, and when we were asked to do the Snapped Ankles remix of Rechargeable I personally felt far more confident that we were up to the job!

KT: I love the charged, upward propulsion of Konta Chorus. It crackles with kinetic energy but has this sort of autumnal, wistful quality about it. Again, back on to what Mike said about the way we work, I played this more elaborate, Magma-inspired part on the bass guitar which sounded great, and Mike and Steve kept saying "Take out that note", "Yeah, and that one" until we ended up with this terrific, headswinging bassline.

MY: Bathe yourself in the hallucinatory underwater wonderland. Allow yourself to be lured ever deeper by the sirens that dwell therein. But beware of the passing of the Leviathan. And god forbid you wake the ancient dreamer who lies sleeping since the dawn of eternity.

SD: One of the fascinations of playing a modular synthesizer is that sometimes, it plays you! While the control freak would be always trying to tame the beast, maybe the easier solution is to occasionally let it have its own way and perhaps this is preferable from an improvisational perspective. Such was the case with some of my parts within this piece and for anyone listening on a top notch HiFi system you will feel the floor rumbling with low end bass. Or maybe it’s not a Bass but Kraken lurking within the depths!

KT: The shimmering sound throughout is actually 'gliss guitar', a technique pioneered by Daevid Allen from Gong, where you bow the guitar strings with a metal rod.

MY: Before you transition to the afterlife it is necessary to negotiate the Unquiet Boundary. If you listen carefully, the bestial border guards can be heard at the end of this miniature.

SD: At some stage during January 2 2018, we decided to attempt a more avant garde approach and shoot for film soundtrack gold – or rather that’s how it turned out. At the time, after we’d stopped recording, we were all in agreement that it was 10 minutes of our lives we couldn’t get back! But later that night, when we listened back to all of our recordings, we started to identify the eerie, darker side of the Utopia Strong. We’re just waiting now for the phone call from Sir Alfred Hitchcock.

Transition To The Afterlife

SD: Most of these tracks had many different working titles before we hit upon the final names. For a while, Transition... was called When Robots Die and I think either title would have summed up the piece up perfectly. The track swirls from sad to happy, unnerving to beautiful over its six-minute duration, and maybe part of its uniqueness comes from the fact that mine and Mike’s synths lines were not allowed to communicate with each other. The result was this “wonky” rhythm unfolding.  Maybe in the future, a “wonky” world is the result of killing off the Robots!

KT: All the pieces on this album are my favourite but this one has a very special place to me. It's one of those tunes I feel so fortunate to have been a part of. Most of what you hear is just from the original recording session, with the three of us playing together. I think the only overdub was Mike playing a bit of duduk. It swirls and ululates itself into such a blissfully ecstatic spiral of funny noise, that you end up as part of the last, only and everything you truly dig.

MY: Pickman’s Model takes its inspiration from the H.P. Lovecraft tale of the same name, which relays the growing disquiet of the narrator as he views ever more horrific and monstrous fantasy paintings by his artist friend Pickman. In the final scene he discovers a photograph of the monster revealing that the paintings are drawn from life and not fantasy after all. One can only wonder how Pickman came to encounter his Model.

SD: It’s hard to put into words what this track means to us. During its creation, we have all danced around the studio and hugged each other in disbelief at what we had created. Then we watched in even more amazement as we played an early mix of the track during some of our DJing gigs and people were freaking out to it and coming up to ask what it was as we had broken Shazam!

These tracks were to a large degree dictated by our original recordings. We were recording on three tracks only and many of the elements are locked in with others. While that was obviously restricting in many ways, it was possibly liberating in others. Having said that I’m sure if we gave the original tracks to another artist they would’ve come up with something totally different to Brainsurgeons 3. We’re really proud of it. There aren’t that many cool techno-tinged bangers with a bagpipes dismount!

KT: I remember it being the three of us that made this and I remember most of what we did to get there but, for the life of me, I have no idea how we stumbled upon this insane party anthem. It bodes well for the next record. The idea with The Utopia Strong is to enter some sort of 'theta state' where, as a musician, you become a conduit rather than a player. I hear a lot of records, particularly under the Prog umbrella where the musicians are 'playing' and that generally seems to get in the way of the music itself. Obviously we had to move our fingers around with a degree of dexterity on a number of different instruments to get these noises, and there are more instruments on this tune than anywhere else on the album, but somehow the end result is this, Brainsurgeons 3.

Do You Believe In Two Gods?

SD: I love this track. It felt like our most risk-taking effort. It’s like The Wicker Man meets The Running Man. Its placement within the album is perfect. It’s like “if you’ve come this far, and you are still onboard, then have a listen to this fucker!” It’s our storm before the calm of Moonchild.

MY: Following in the great tradition of Moonchildren from such greats as King Crimson, Captain Beefheart, Iron Maiden and John Zorn. This closing track is unique on the album in that it is the only piece in which we collaborated with another musician, the only piece with vocals or indeed lyrics. Katharine Blake of Mediæval Bæbes/Miranda Sex Garden composed and recorded the stunning vocals, a hymn to the eternal woman. Which were then given the full Utopia Strong treatment allowing them to drift away forever into the infinite aeons beyond the threshold of perception

KT: When we came up with the original piece, all three of us knew it needed singing and there really wasn't anyone else we could hear doing it except Katharine. I'm so immensely proud of the beautiful music we made together. This spectral, otherworldly closer is where I want to live forever. I'd happily pay eternal rent to a diabolical landlord to have a one bedroom basement flat in that numinous fade.

The Utopia Strong is available now via Rocket Recordings. Check out new single, Strange Altar, below, and check the band out live at one of the dates below: